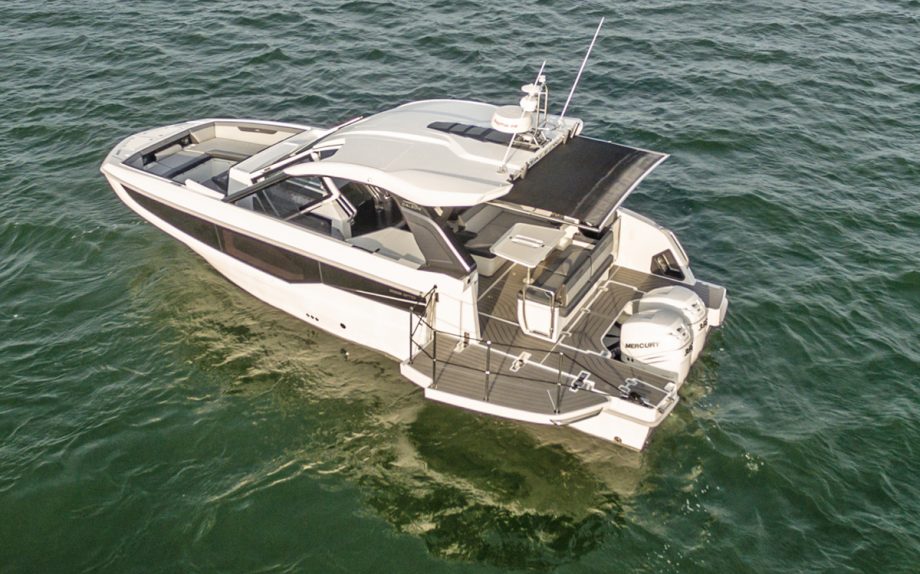 At the recent Cannes Yachting Festival 2021, Motor Boat & Yachting editor Hugo Andreae took the chance to look inside the Galeon 325 GTO, which was making its European debut.

Given the boom in popularity of boats like this, it was only a matter of time before Galeon took on the outboard sportsboat market. It already builds a range of smaller, cheaper outboard-powered craft under the Galia brand but this is a much more upmarket offering.

Development has not been rushed though; the Galeon 325 GTO was three years in the making, but it will springboard an entire new range of outboard-powered cruisers up to around 40ft.

As we have come to expect from Galeon, there is innovation all over the place. The living space on deck shames larger boats of this style with its covered central seating area, drop-down cockpit terrace on the port side and the inclusion of a deep bowrider section that could easily sit six people thanks to its beamy squared off shape.

What’s more, the sunken foredeck doesn’t pinch headroom inside the cabin, where the finish looks up to Galeon’s usual high standards. There’s a convertible double forward and a slightly larger bed tucked underneath the cockpit amidships.

A practical touch is the companionway ladder’s ability to spring up and out of the way so that access to the amidships berth is unencumbered. Twin outboard engine options run from 300hp to 450hp, the latter likely to be capable of 45 knots.

Priced to a turn-key UK spec, the Galeon 325 GTO should be well in the mix to challenge the Bavaria Vida 33 and Saxdor 320 GTO.