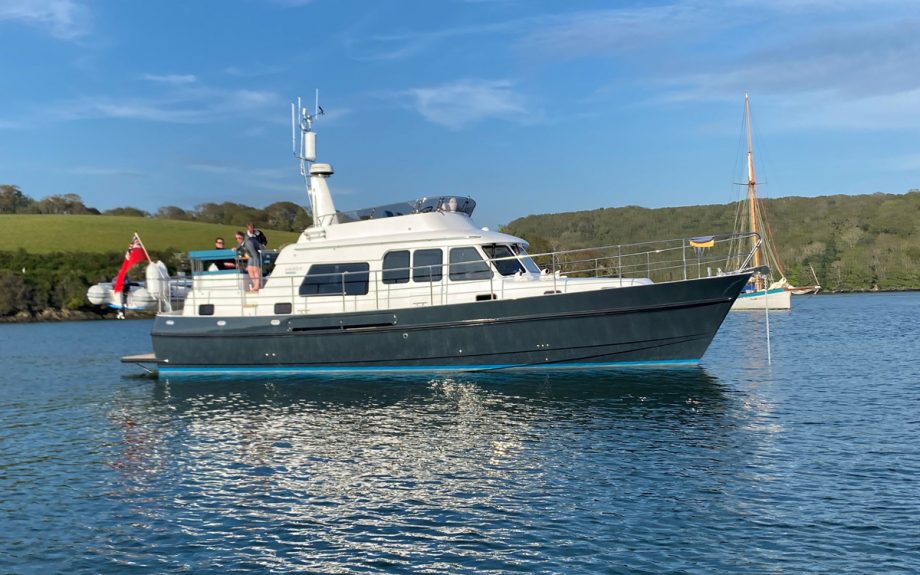 At this year's Southampton Boat Show, Motor Boat & Yachting editor Hugo Andreae took the chance to look inside the Hardy 42 Hybrid, the first model to be finished under the yard's new ownership.

Every now and then we stumble across a boat that feels more than the sum of its parts, and the Hardy 42 Hybrid is one of them.

The 42 has been around in previous guises for quite a while now but the combination of a new yard, Falmouth-based Cockwells (builders of the Duchy range of gentleman’s launches), and a commissioning owner with exceptional foresight has resulted in the best iteration yet.

As the name suggests the 42 Hybrid is a diesel-electric hybrid that genuinely seems to offer the best of both worlds. Its single diesel 440hp Yanmar engine can deliver a top speed of 16 knots from its comfortable semi-displacement hull form, and a range of 600nm at 12-14 knots.

This makes for effortless passage-making, even in conditions that might challenge faster planing boats, but once you arrive at your destination you can switch into electric boat mode for near-silent cruising at 4-5 knots for 2-3 hours.

The owner of this boat plans to cruise the waterways of Europe, making it the perfect craft for crossing the English Channel or the North Sea under diesel power before letting electric take over once into the more protected inland waters where speed is limited anyway.

Once the batteries drop to 20%, a diesel generator automatically kicks in which drives the electric motor directly using far less diesel than the main engine and/or recharges the batteries in just 45 minutes.

It even adds a useful degree of redundancy so that if one of the motors fails, the other can operate independently and, unlike a twin diesel set-up, you no longer have to worry about dirty fuel stopping both engines.

As well as its clever drivetrain, this latest generation Hardy is awash with useful cruising features. There are more access hatches and storage lockers than we can recall seeing on any other sub-45ft boat, meaning you can get to every void to fix any issues or stow extra cruising gear.

The build quality of the hull and wooden interior is solid, and the two cabins at opposite ends of the boat ensure excellent privacy and space. An extra set of doors from the aft cockpit into the saloon is a useful improvement, while a folding radar arch, flybridge helm station and windscreen allow it to sneak under the 3.5m air draught limit for the European canal system.

The hybrid system pushes the price up to £954,000 for this fully specced boat but that doesn’t seem out of kilter for a no-compromise, fit-for-purpose cruising ship like this.