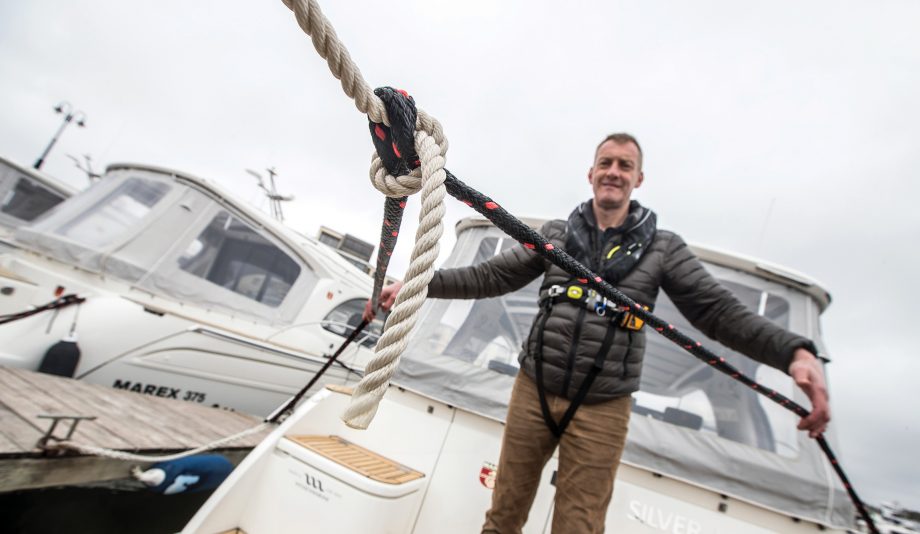 Unlike our sailing cousins, as motorboaters we don’t need to know dozens of different knots. However, there are four essential knots that you really do need to know how to tie and when to use: a bowline, a clove hitch, a round turn and two half hitches, and a sheet bend.

All four-need practice and regular use to ensure it becomes second nature, as like every skill it fades with time and lack of use.

The traditional boy scout knot, its greatest asset is that once tied and pulled tight it creates a secure loop that can be passed through cleats or tied round items such as riser rails or rings. As long as there’s tension on the line, it will remain secure.

I use it regularly to pass through the centre of cleats and then loop up and over the ears to give a really secure and almost chafe-free attachment.

However, you do need to be careful as its greatest asset (its security under tension) is also its greatest issue as you cannot untie it with any load on the line, so never use it unless you can free the other end of the line to release the tension.

How to tie a bowline

Once you’ve tightened the bowline to secure it, you can pass the main loop that you’ve created through the centre of an open cleat and hook it back over the horns. This is very secure and avoids the possibility of chafing the rope.

A very simple knot that allows you to quickly fasten a line around something, such as a guard wire or rail. It’s great for tying on boat fenders and is easy to adjust simply by releasing some tension on the crossover and shortening or lengthening the lines.

The danger is that if that tension comes off the line, for example when the fenders touch the water, then it can self-release.

To make it more secure you can make extra turns before passing the line through itself or pass a half hitch over the end with the load on to stop it loosening.

How to tie a clove hitch

Pass the line over the railing and back under, then cross it over the standing line as you pass it back over the railing. Leave the crossing part loose, tuck the tail end under it and tighten.

The ability to lasso a cleat can make coming alongside a lot safer and easier. Our step-by-step guide shows you

3. Round turn and two half hitches

Perhaps the knot I like best, simply because it’s so versatile and easy to tie. You can pass a whole turn around whatever you want – cleat centres, handrails, rings or posts – and then finish it off with a pair of half hitches, both tied in the same direction.

It’s compact, has very little chafe, and best of all it’s very secure but can be undone even with a load on it – for example on a falling tide.

This also needs watching as the unwary can undo something not realising that it may be under considerable tension. It’s also great for fenders that are not going to be adjusted for a while and must not slip.

How to tie a round turn and two half hitches

Pass the line over the railing twice then pass the loose end round the standing line and tuck it through the top of the loop to create the first half hitch and repeat for the second.

A simple but often forgotten knot that is very handy for tying two ropes together. I find it invaluable for things like rafting up when you need long shorelines but all yours are too short.

It looks the same as a bowline but is composed of two different ropes. If the ropes are of different thickness then it’s usual to tie the thinner one to the thicker.

It’s also superb for tow lines, but be warned, if you have applied a lot of weight, the knot may require some serious persuasion to undo.

How to tie a sheet bend

Create a loop in the thicker of the two lines (in this case the black and red one) then pass the thinner white line up through the back of the loop, around the back of it then tuck the tail end under the standing part of the white line.

This makes a secure towing bridle and as long as you have an open end on the red and black line it’s easy to centre the tow behind by adjusting that end on your boat’s aft cleat.

MBY’s How To video series is brought to you in association with GJW Direct.