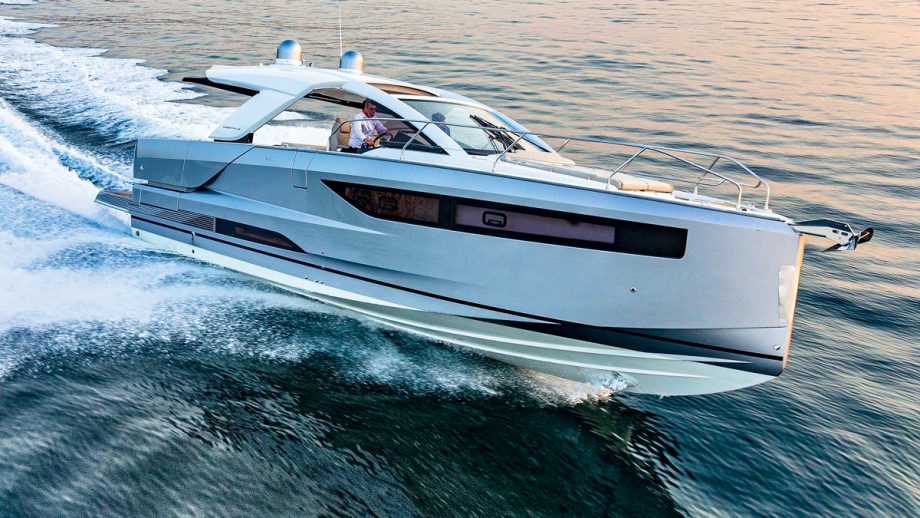 The DB43 ushers in an all-new style of boat for Jeanneau that wades into battle against a raft of high quality competitors. Does twinning a highly versatile cockpit with genuinely usable accommodation give this model the edge? MBY deputy editor Jack Haines takes a test drive of the Jeanneau DB43...

There was an air of inevitably that Beneteau Group would soon add to the throng of big T-top sportsboats on the market but the question remained as to which brand it would use to target the sector.

Beneteau (the brand) has a range of sportscruisers in its own stable of course but the group is now in possession of Wellcraft and Scarab, two brands which could feasibly be moulded into an entity to take on the Fjords, Axopars and Pardos of this world.

Ultimately it was Jeanneau that got the nod and in reviving the DB moniker that adorned a range of sportscruisers in the 1980s, the brand has on its hands an all-new concept that we are promised will sprout larger and smaller models from the same blueprint.

Using the Jeanneau brand for this creation makes sense for a number of reasons. The current range is sporadic with everything from 6m Merry Fisher pêche promenades to the more sophisticated NC and Leader ranges but there is nothing like the DB43.

The two men behind this project – designer Camillo Garroni and naval architect Michael Peters – both have experience working with Jeanneau and the wider Beneteau family and are tuned to the intricacies and challenges of what is achievable within the realms of a mass production environment.

What is clear from the outset is that with the might of the Beneteau Group R&D budget behind it and these two well established design names on board, the Jeanneau DB43 was unlikely to arrive at launch undercooked.

It is an intriguing design that really comes alive when you see it in the flesh, especially in the silver hull paint of our test boat (white gel is standard). With the cockpit terraces deployed it looks stubbier and taller than the initial 3D renders suggested it might be but it’s impossible to ignore the sheer breadth of the cockpit.

With the terraces down the usable living space is increased by a whopping 6ft, taking the overall beam to 18ft 5in (5.63m). The other element of the design that is immediately striking is how tall the topsides are and the generous freeboard, especially at the bow.

The reason for this will become clear as we delve deeper into the boat’s configuration.