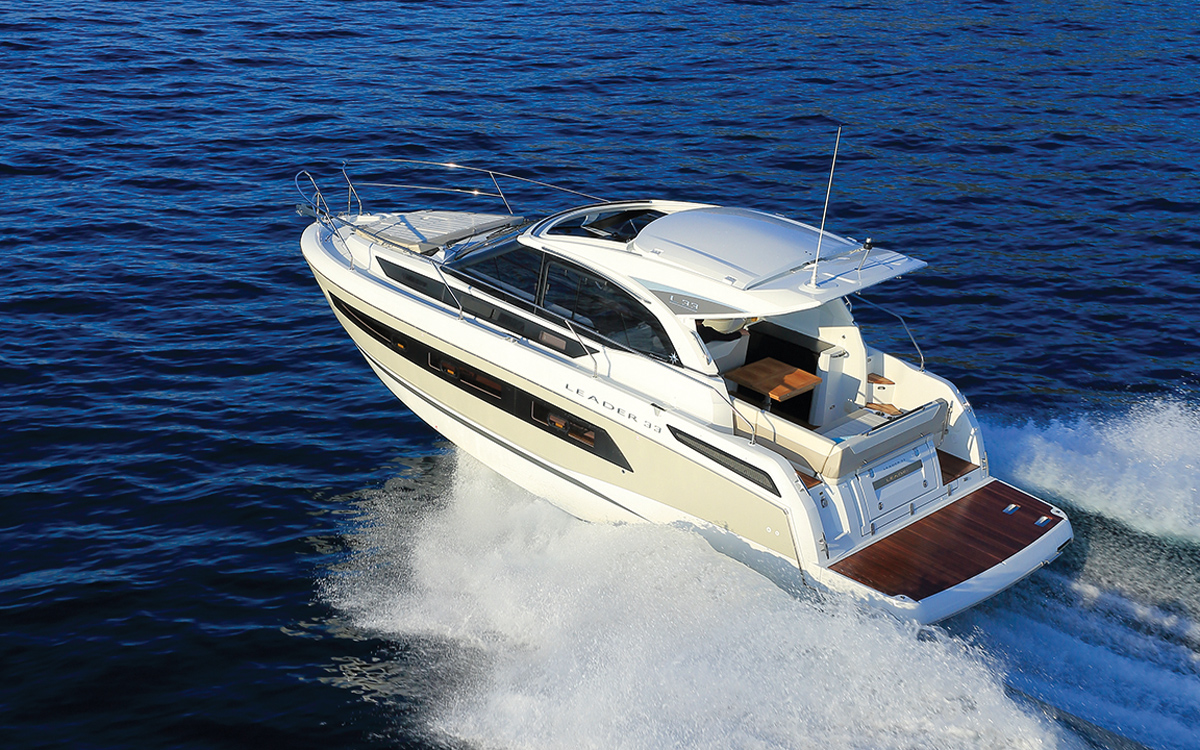 With the rise in popularity of outboard engines on larger craft, we put the latest Jeanneau Leader to the test in an inboard vs outboard challenge

It’s an incongruous sight, Jeanneau’s latest Leader 33. It looks a little like someone decided to fit a back-up auxiliary outboard but due to a communications breakdown, a 250hp was mistakenly bolted on instead of a 10hp. And then you notice that there are two of them…

Welcome to the future, which for many, is outboard powered. Once the domain of the small runabout, outboard power is big news in the USA where petrol is (comparatively) cheap. They think nothing of adding four engines to boats that stretch past 50ft.

And it’s a trend that’s starting to catch on in Europe as outboards get more powerful yet also quieter and more efficient. Fans cite easy access, compact size, the ability to tilt the entire unit, drive and all, clear of the water (something you certainly cannot do with an outdrive), cheaper servicing, reduced space requirements and the ability to easily swap out a motor if required – simply crane one off and bolt a new one in its place.

Even traditional European builders like Azimut are dabbling – its outboard powered Verve 40 having just been joined by the similarly propelled Verve 45. Now it’s Jeanneau’s turn.

What makes this test particularly interesting is that berthed alongside it in Cannes is a Leader 33 inboard. Available with Mercruiser petrol or Volvo Penta diesel, I’m aboard the latter; tucked under the back seat are a pair of D3-220 220hp sterndrive diesels.

The Jeanneau Leader 46 offers a variety of engine and drive options, two deck layouts and two or three cabins.

It’s a good-looking boat. Identical bar the twin outboards hanging off the cutaway bathing platform, it’s an innocuous yet pleasing shape, short of foredeck but consequently long of cockpit. Both examples are Sportop versions – Jeanneau offers this boat with a completely open cockpit or with the Sportop hard top (fitted with a solid powered opening roof section) as an option.

However the boat remains unashamedly cockpit on the main deck, if you want a deck saloon then Jeanneau’s NC33 is the boat for you. The port side of the cockpit is one huge loop of seating from one end to the other around a folding (but not removable) cockpit table, but it contains a couple of neat twists.

Lift the backrest of the rear section vertically an inch or two and you can then drop it flat, creating a sunpad, and what’s really clever is the ability to then drop the backrest to the side, converting it to a multi-position pillow. There’s a large locker beneath it, accessed via the cockpit or the bathing platform.

At the front of the cockpit you can lift the forward edge of the seat, quickly converting it to forward-facing seating, albeit set back slightly from the helm seat rather than alongside it. The starboard deck is simple to access but the port is blocked by the dinette – if you want to get to the port deck it’s easiest to go up the starboard side and across.

It feels like a well-honed layout from an experienced builder, which of course is exactly what it is. Whilst not devoid of compromise (inevitable on a 33ft boat), it’s well managed for maximum practicality and usability.

Read the full review of the Jeanneau Leader 33 in the September 2019 edition of MBY.