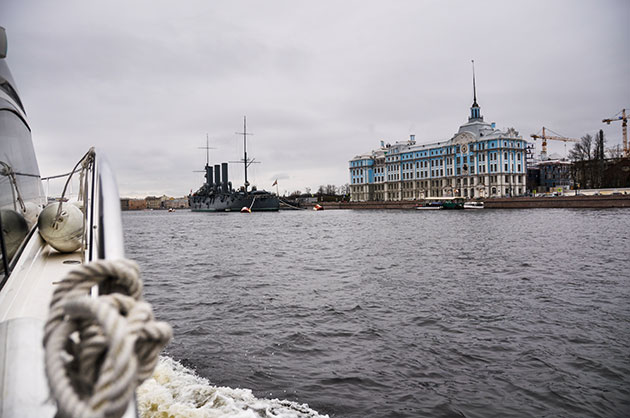 After being arrested for entering Estonia illegally and grounding their boat on a sandbank, John and his crew finally reach St Petersburg

Around 10pm I get another knock on the cabin roof. Since our ‘illegal’ arrival in Estonia I have grown accustomed to frequent visits from the border police – what do they want this time?

Except it isn’t the police – pulled up on the quay alongside us is a white van and a friendly cigarette-smoking Estonian with 250 litres of diesel for us. I have never been so happy to pay someone such an exorbitant price per litre for diesel – in cash of course. Despite our recent string of bad luck there is still hope of reaching St. Petersburg, provided we can sneak out before live firing practice restarts!

By dawn the thick fog has evaporated, the sun is shining, the sea has flattened off, and when we test Cecienne’s performance there are no signs of any prop damage from our unscheduled meeting with a sand bar in the entrance channel to Vergi harbour. We’ve spent a total of four nights in the strange isolation of this remote Estonian outpost, only seeing one person other than the police and our fuel guy the whole time. But at last we can leave. St. Petersburg here we come!

The visa application for Russia is not straightforward and is described in detail in Imray’s Baltic Pilot Guide. Most problematic is that it has to be done in person in either London or Manchester so that your fingerprints can be taken. When you live in Cornwall that is a mission!

Earlier in the year Mark and I had travelled up midweek, only to discover the premises shut as it was a public holiday in Russia. Second time lucky. And entry formalities for a foreign boat – especially one from the UK – promise to be even trickier now we are about to cross into Russian waters. Anglo-Russian relations are at a 50-year low.

And the advice we’d been given in Roomassaare is still fresh in my mind: “You will need guns. Otherwise you won’t get out of there – they will steal a boat like this one.” I picture a grey city, dilapidated Moskovitch cars far outnumbered by military vehicles, and cigarette-smoking men in long raincoats tracking our every move.

Our sponsor for our visit is Vladimir Ivankiv, who acts as agent for just about every visiting foreign boat. Vladimir actually wrote the Russia section in the Imray Baltic Pilot Guide. He has sent us detailed instructions to follow from the moment that we enter Russian sea space. “Follow these and you will be fine,” he assures us.