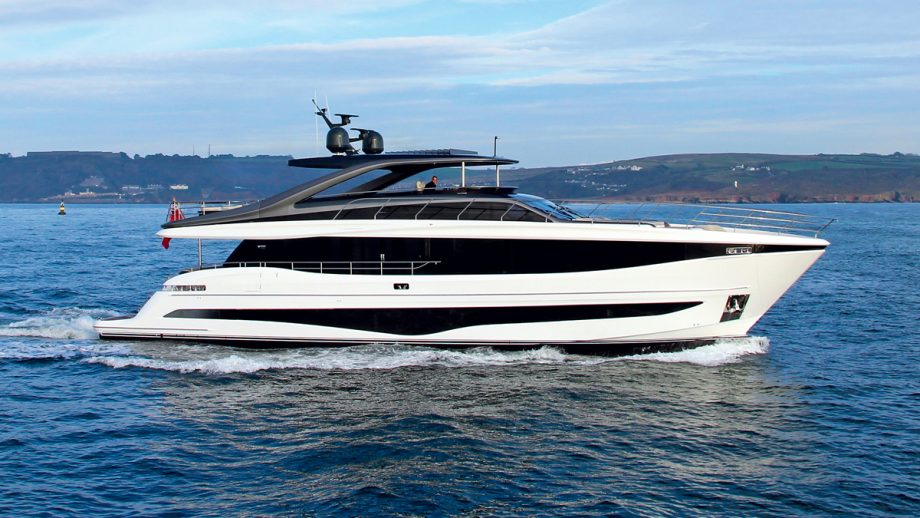 Hugo Andreae, editor of MBY, takes us inside the brand new Princess Y95 following its recent launch at the Plymouth yard...

When Princess Yachts launched the tri-deck Princess X95 back in 2020, it always planned to offer a more conventional open flybridge version too. The fact that it has taken Princess two years to get round to it is actually good news.

Concerns that the X95’s bold new looks might prove too much for some to swallow have shown to be largely unfounded. As a result, the yard has been so busy churning out X95s (18 built with a further eight on order) that the Princess Y95 got temporarily shifted onto the back burner.

Now it has finally arrived, we can’t see the workers on the Y95 production line getting much downtime either!

Featuring a full-length open flybridge with an enclosed bridge deck a few steps forward and down from it, the new Y-model has a sleeker, more conventional profile than the X95.

It loses out on that boat’s spectacular skylounge and the “country kitchen” option of an open-plan main deck with a big galley/dining area under the windscreen but the rest of the interior matches it blow for blow and the upshot is even more outside entertaining space to revel in.

The most obvious win is that vast new flybridge, which much like the one on the new Sunseeker 100 Yacht has asymmetrical access. There are steps leading up to it from the aft cockpit but you can also walk forward from the flybridge through a small gate on the port side to a gently sloping side deck that leads down to another socialising space on the foredeck.

This in turn leads round to another set of steps on the starboard side that drops you back down to main deck level. While this might make life a little harder for the crew when it comes to putting out fenders, it gives a much better connection between the different levels and locations of the outdoor guest spaces.

The flybridge is predictably massive with multiple furniture options as well as a hot tub, a 1,000kg crane (so you can store a couple of jetskis up here) and a hard top with either a solid composite structure, fixed glass skylights or rotating louvres.

To our eyes, the foredeck lounge with its sunpads on one level and sofa on another isn’t quite as appealing as the X95’s more sociable arrangement of a big U-shaped seating area and sunpad all on the same level but the Y95’s long raked windscreen puts paid to that.

The other minor sacrifice is the loss of the forward-facing window from the main deck owner’s cabin. By any other standards, it’s still a magnificent cabin with big side windows guaranteeing panoramic views and lots of natural light but there’s something quite special about lying in bed looking straight out in the direction of travel.

The lower deck accommodation is exactly the same as the X95’s with two equally impressive full-beam VIP cabins at either end and a pair of twins/doubles in between, all with their own ensuite bathrooms.

The engine room and crew quarters occupy the aft end of the lower deck, again with multiple options for the number of cabins and either a crew mess, beach club or jet-ski garage behind the lifting transom.

Twin MTU V12s of either 1900hp or 2000hp enable speeds of up to 24 knots and a range of more than 1,500nm at 10-12 knots from 13,800 litres of fuel. It all adds up to another fine flagship for the Plymouth yard that sneaks under the 24m loadline threshold, leaving customers the tricky choice of whether to plump for X or Y.