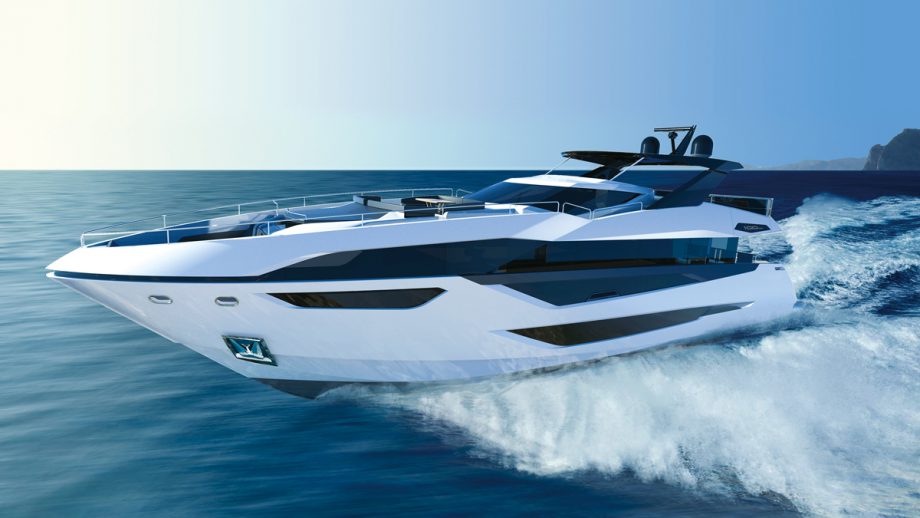 The Sunseeker 100 Yacht is set to usher in what the British yard calls a “new era” in flybridge design. We jumped on board during its Cannes 2022 debut...

Aggressively styled, with an unbroken window line that seems to separate the superstructure from the hull, the new 100 Yacht’s potent three-dimensional aesthetic generates huge visual impact.

But what really sets the new Sunseeker 100 Yacht apart is not so much its style as its thought-provoking reinterpretation of the tri-deck layout.

By creating a full-beam walkaround upper level with easy fore-and-aft access to the foredeck lounge, the new Sunseeker’s flybridge is able to encompass almost the entire boat’s length.

It runs, obstruction-free, all the way from the main deck transom steps to the owner’s forward terrace, providing complete walkaround access from bow to stern.

It looks well equipped in terms of entertaining options too. In addition to the flybridge’s central dinette, there’s plenty of space for an optional helm station, free-standing loungers, wet bar and Jacuzzi.

And the foredeck itself also offers two separate seating arrangements, as well as the option of a laser projector and a 140-inch cinema screen for lazy evenings at anchor. Back down on the main deck, the forward owner’s suite leverages the full scale of the yacht’s beam.

In addition to floor-to-ceiling windows on both sides, it also includes a sliding glass door that leads out onto the owner’s private foredeck terrace. And for everyone else, the lower deck provides lavish ensuite accommodation for up to eight guests.

The crew have their own space in the bow with separate access to the galley and three small ensuite cabins.

Other key features include a raised pilothouse with a glass aft bulkhead that allows guests an uninterrupted view forward from the flybridge, and a ‘penthouse style’ saloon with floor to ceiling windows formal dining for eight, an impressive aft lounging area to port, plus an optional sliding door to starboard.

The integration of fly deck and bow lounge is deeply impressive

And when you step out into the big aft cockpit, the recreational flexibility is equally well considered. While the floodable tender garage is large enough for a Williams 460 Sportjet, plus jetski and Seabobs, it can also be converted into a decadent Beach Club with built-in barbecue, rain shower and sunlougers, similar to the recently-launched Sunseeker 90 Ocean.

The 100 Yacht will sneak in just below the 24m waterline length, ensuring it is classed as an RCD Category A leisure vessel rather than having to meet the more onerous regulations for a superyacht.