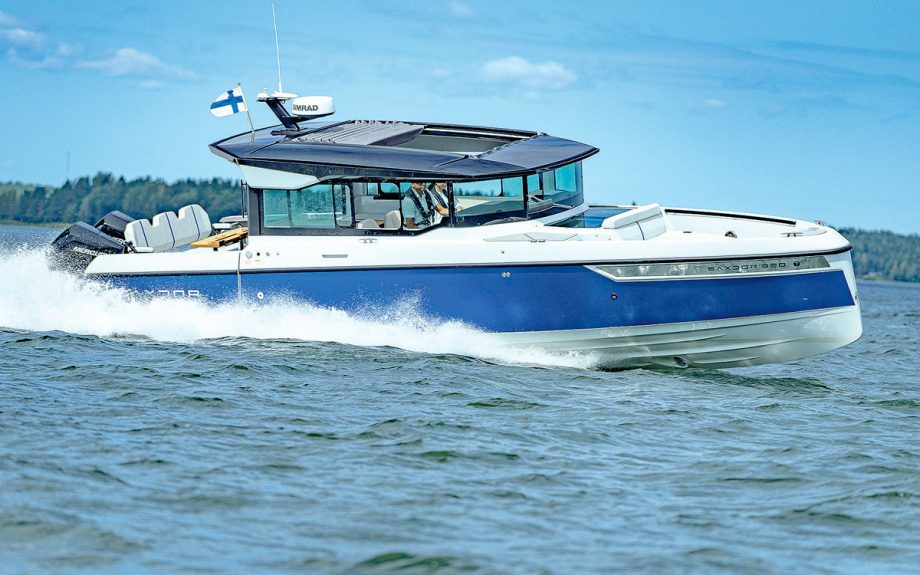 At the recent Southampton Boat Show, MBY editor Hugo Andreae took the chance to tour the Saxdor 320 GTC, which was making its UK debut.

Given how much fun the open Saxdor 320 GTO was to drive, we’ve been looking forward to getting our hands on this new cabin version too.

Although we did manage a very brief test run on the Saxdor 320 GTC in the Bay of Cannes neither the propellers nor the steering were properly sorted in time for the show so we’ll reserve judgement on how it performs until later.

What we can tell you is that Saxdor’s talent for innovation shows no signs of slowing. The full beam design makes for a surprisingly roomy wheelhouse with a door at the forward end giving access to the bow.

It does mean losing the walkaround decks (you can just about shuffle along both side decks thanks to a concealed handrail in the roof) but other than the slight hassle of deploying fenders from either end or through one of the optional side windows, it’s a trade-off worth making.

There’s room for three swivelling helm seats as well as a galley and a dinette that converts to a bed, in addition to the double berth and heads below decks. The folding side platforms also make the aft cockpit feel less cramped than normal.

An electric sunroof prevents the wheelhouse turning into a greenhouse in summer with optional heating for winter time too, making it well suited for use as an all-seasons weekender.