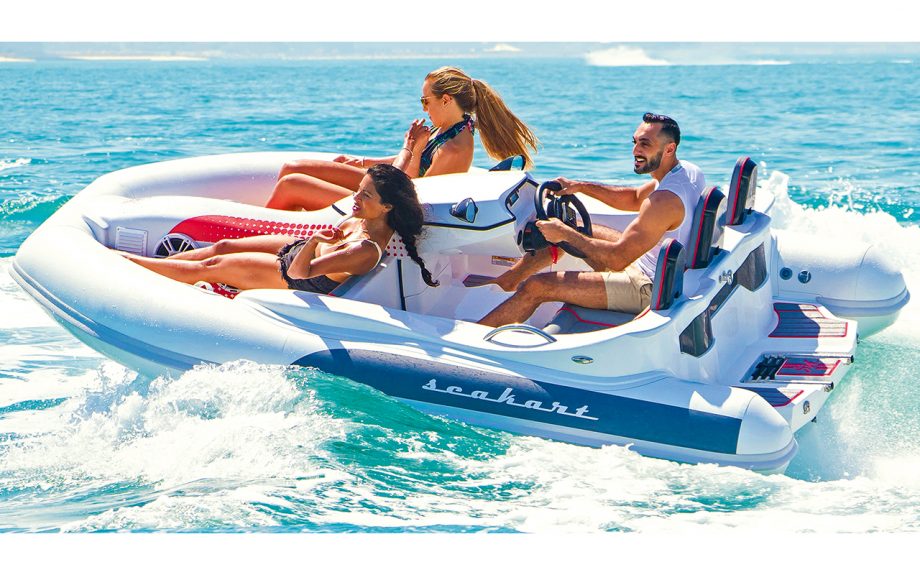 The Seakart 335 has to be one of the most exciting new products to dart across our bows this year.

Described by its distributor as a unique hybrid combining the speed and excitement of a jet ski with the safety and comfort of a RIB, the Seakart 335 is a waterjet propelled maritime missile capable of speeds of up to 45mph.

Also impressive for such a small craft is that it can carry five people, all of whom sit facing forward with three across the stern and two just ahead of midships.

In our view, all of this makes the Seakart 335 quite a contender, either as a tender, a family fun boat or a simply serious toy.

The controls at the centrally-located helm are ergonomically positioned around the height-adjustable sporty steering wheel.

There’s no throttle lever, instead the Seakart 335 features an accelerator paddle behind the right hand side of the wheel and a neutral/reverse paddle on the left – this boat thinks it’s a sports car.

The benefit is that the driver gets to keep both hands on the wheel at all times, which has to be a good thing when you’re bouncing around flat out.

The steering has also been designed for performance, and rather than having to spin the wheel two or three times, a quarter turn is all that’s needed to achieve full lock.

Once you’re up and running, the troops can be kept amused with the onboard Fusion Boosted Audio system, comprising four 8.8″ Speakers in the bow, two 4″ speakers at the helm, a hidden BB300 black box stereo and a four-channel amplifier.

All of which are managed by a remote controller on the steering wheel.

So there you have it – a jet rib that thinks it’s a sports car. It even has wing mirrors, ostensibly for tow sports, but as every boy racer knows, they’re also handy for spotting blue lights coming up behind…