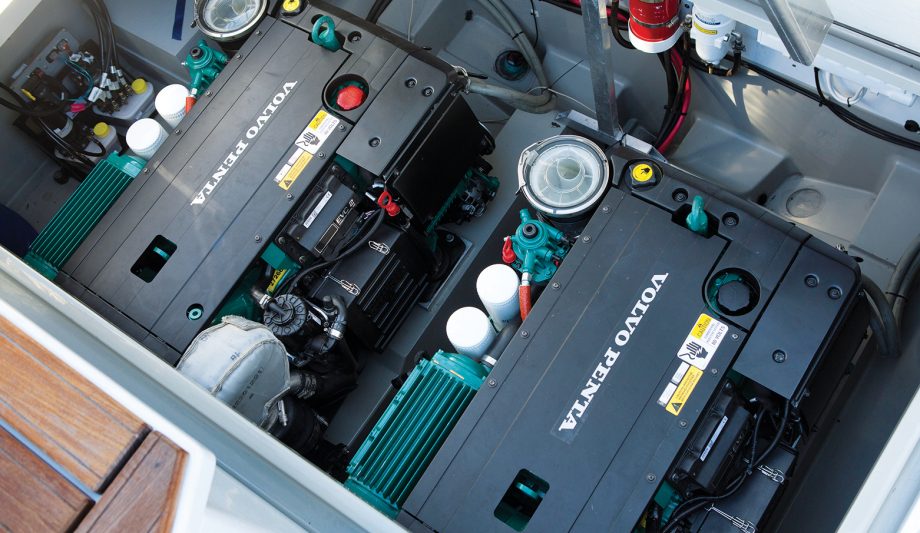 A new generation of D4 and D6 engines and drives is crucial to the success of almost every new motorboat between 30ft and 50ft. We take them for a spin...

Volvo Penta has revamped its entire range of D4 and D6 diesel engines in a bid to deliver more power, increased reliability, improved efficiency and lower running costs. It has also launched a new Duoprop sterndrive leg as well as a new engine management system and redesigned throttles.

The changes represent the most comprehensive refresh of its four and six cylinder diesel drivetrains since their launch in 2005, and with more than 100,000 of them sold to date the stakes could hardly be higher. So what has changed and how should that benefit customers?

The props use a harder stainless steel alloy

The latter is reserved for shaftdrive and IPS applications only, although a new 440hp DPI sterndrive package still represents a 70hp uplift over the previous top of the range sterndrive unit. All the lower-rated models also get a 10% horsepower boost across the range.

With no change to either the capacity or footprint of the 3.7-litre D4 and 5.5-litre D6 engine blocks, the extra power is largely down to new superchargers and turbochargers as well as upgrades to the engine management and fuel injections systems.

The high-pressure common rail injection system now operates at 2,000 bar (up from 1,600) for more precise control of fuel delivery and combustion. This also improves fuel economy by between 1% and 7%, with the largest gains at the lower horsepower ratings.

Although the new 440hp and 480hp D6 variants will be welcome news for manufacturers of 45-55ft craft – especially if it avoids having to specify the larger, heavier, costlier D8 engines – the claimed improvements to reliability and running costs will be appreciated even more by boat owners.

Around 85% of the parts have been re-engineered to achieve this, including stronger cylinder heads, pistons and valves. The entire factory has also been reorganised to create a totally sterile ‘clean assembly’ room. This whole area is kept at a slightly higher pressure to ensure no dust enters it.

As a result of this and greater use of fitted-for-life components, such as the new crankshaft gas separator, Volvo claims to have increased service intervals by 20%, reduced the quantity of spare parts and fluids needed over the first 10 years of ownership by 40% and is predicting a 30% reduction in unforeseen breakdowns.

The biggest change to the new DPI leg is a hydraulic clutch, offering smoother gear engagement and low speed trolling. This allows varying degrees of clutch slip at idle (without damaging the clutch), starting with just 10% of the normal drive to 100% when fully engaged. This allows much finer speed control around the marina without needing to click in and out of gear.

The new DPI drive also features electronic fly-by-wire steering as standard (previously a cost option). This removes the need for hydraulic cables at the helm and makes it easier and cheaper to fit the optional joystick on twin-engine installations. The control unit is now separate from the drive so it can be mounted in a more accessible place and includes a steering angle feed for the boat’s MFD.

Other new features include early warning alarms for water in the bellows and low-level gear oil, and fitted-for-life prop shaft seals. As a result oil and filter change intervals have also been extended from once a year to every other year. A harder stainless steel alloy has been used to manufacture thinner, more durable propeller blades for reduced drag and a longer life expectancy.

The new drives are rated up to 50 knots but there is still no replacement for the high speed DPR drives. Volvo says there isn’t enough demand to justify developing a new one.

Improvements to the joystick functions include the addition of a holding station feature on sterndrive applications (previously only on IPS) and a driving mode that allows you to steer the boat at speed using the joystick rather than the wheel.

The throttle controls have also been upgraded with buttons for the low speed trolling and joystick driving modes as well as a new gunmetal finish.

By far the most noticeable improvement on both sterndrive boats was the slicker gear engagement. Instead of the usual half second delay followed by a noticeable thunk and judder from the drivetrain it’s now so subtle that I had to double check whether it really was in gear.

As before the six-cylinder D6 is considerably smoother than the lumpier D4 (in-line sixes are inherently better balanced than straight fours) but without a back-to-back comparison of old and new it’s hard to say whether there is any overall improvement in noise and vibration.

The handover from supercharger to turbocharger seems a little smoother (although the supercharger whine is still quite apparent under full load) and the extra power and acceleration from the uprated engines was enough to make a difference.

The Leader 46 reached 35.1 knots with the new 440s compared to 34.0 knots during our original test of the boat with 435hp IPS600s. Not surprisingly the joystick manoeuvring system proved less effective on the Leader 46 than it did on the Sargo 33 due to the sheer amount of boat it was trying to shift and the distance from the drives to the bow, especially in the windy conditions of our sea trial.

The joystick driving mode takes a bit of getting used to due to its relative sensitivity compared to a traditional helm wheel. With both the joystick and throttles set up for right handed operation it also makes it tricky to operate them both at the same time.

However, people who have used it regularly say it soon becomes second nature. It is said to be particularly effective on longer journeys when you can twist it to adjust the autopilot heading in five degree increments or push it sideways to make a more significant change and then let it go when you’re happy with the new heading.

The DPS station holding feature is also a boon for countering wind and tide when waiting to enter a lock or berth, although as with the manoeuvring function it can only cope with so much before physics overwhelm its best efforts. The IPS650 system fitted to the Prestige was noticeably more effective in this regard.

Although the changes are evolutionary rather than revolutionary, they are enough to retain Volvo’s dominance of the European market for diesel solutions in the crucial 35-55ft market sector, at least until it launches a production ready hybrid or full electric package (something they are already working on in the commercial sector).

Those powerful new D6 440 sterndrives in particular will be a godsend for overtly sporting craft like the Fairline Targa 43 and Windy Camira 39 where every extra horsepower counts. We can’t wait to see how they perform in one of these hulls.