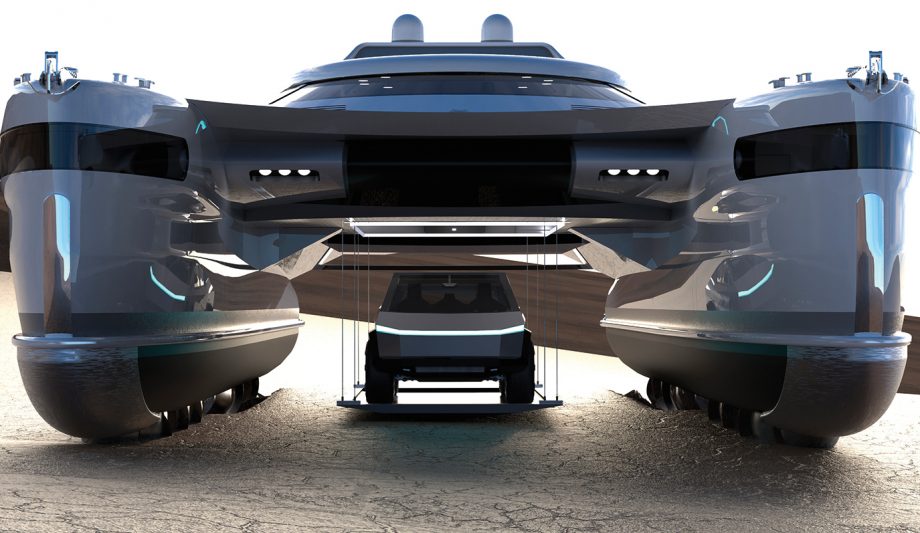 Called Pagurus, Latin for crab, this unlikely vessel was designed for the military but has since been adapted for a leisure role.

Powered by a couple of large diesels on waterjet drives, it could deliver a maximum speed of 25 knots out on the open water.

But the real novelty is its amphibious capability, which stems from four large-diameter threaded cylinders, two in each hull, that drop down beneath the hull and screw their way along the sand like a pair of giant augurs.

The Ken Freivokh exterior is a real head turner

These are powered by their own separate diesel engines and hydraulic drives. Steering is done by varying the rotating speeds on each side.

On land a top speed of 9mph is touted, although it’s hard to imagine the crabmaran being effective on anything other than sand.

Other unusual features include a main saloon that doubles as a tender or vehicle garage which then lowers into the sea or down onto the land so its occupants can explore the area.

The hulls have room for up to four double guest cabins supported by a crew of four. Hybrid technologies such as shaft generators and solar panels could provide a quiet-mode capability at five or six knots.

Lazzarini estimates a conventional composite powercat version would probably weigh in at around €6.6 million but a reinforced steel/carbonfibre Crabmaran version would be more like four times the price.