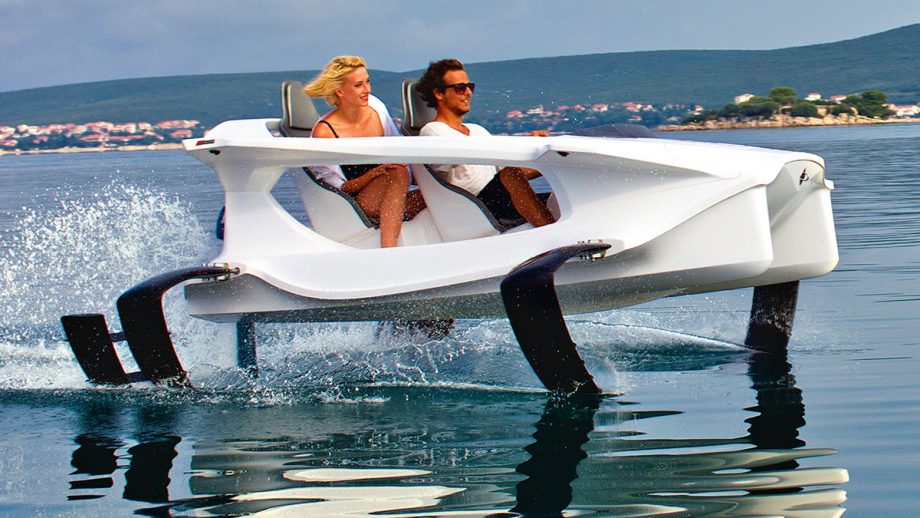 One of the most important aspects to come out of the recent rise in the development of electric boats is the need to minimise drag, and one water toy taking advantage of these benefits is the Quadrofoil Q2S.

Looking a little like a sportscar, it features tandem seating for two, an open-sided hull and large hydrofoils that rotate 180° when deployed, avoiding the draft issues of fixed foils.

Driven by a 3.7kW electric motor powered by a pair of 5.2kWh lithium-ion batteries, it will reach speeds of more than 20 knots, but intriguingly, will lift up onto the foils and ‘fly’ above the surface at about 6 knots, meaning that you could fly in speed-restricted areas like the River Dart, for example.

It’s also exceptionally quiet, just 32dbh according to the manufacturer. Another unusual facet is that it uses the foils to steer, both front and back foils pivot, giving a remarkable 7m turning circle.

Run time is up to about 2 hours, giving a theoretical range of 50nm, and it can charge from flat in 4 hours at a cost of less than €4.

The Quadrofoil range has built in the Solvenian town of Slovenska Bistrica by Austrian solar panel manufacturer Alumero Group since 2015.