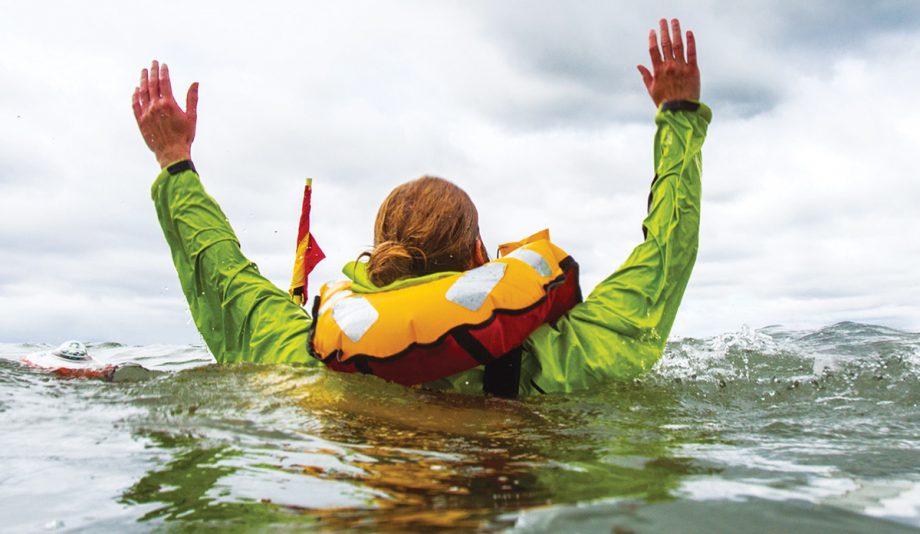 Someone falling overboard is a very worrying situation, so it’s important to know your man overboard procedure off by heart.

There are so many factors that affect how serious it could get: water temperature, sea conditions, location, age, fitness, clothing, whether they are wearing a lifejacket.

By far the best solution is to try and prevent anyone falling overboard by briefing crew on simple things such as holding on, wearing appropriate footwear, not leaving the cockpit underway, wearing a lifejacket. All of this helps, but sadly it does still happen.

So, what should your priorities be if and when it does? How do you position the boat to get back to them, and if you are boating as a couple, how do you get your partner safely back aboard?

I can’t stress enough how strongly I advocate practising your man overboard procedure, otherwise you won’t know how to cope when an incident happens.

Your first action should be to slow the boat down, not in a mad slam-the-throttle-shut way, but with a swift reduction of speed. Now locate the MOB, they should be behind you and adjacent to your wake.

Once you spot them, keep a close eye on them at all times – if you’re alone in anything more than flat seas you can lose sight of them remarkably quickly.

Your wake acts as a beacon, so make the best use of it while it lasts. Needless to say if you can’t spot them almost immediately, consider putting out a Mayday call or pressing the MOB button on your chartplotter and/or DSC-equipped VHF marine radio.

Assuming you can see them, turn the boat back towards them. You are going to use the wind to drift down towards the casualty, so turning upwind now (i.e. into the waves) will save time.

The 28ft Windy we used for this video drifted beam-on to the elements in an F4 wind at over a knot, so allow for at least 10m upwind as a minimum, even more if it’s windier. This will give you time to judge the boat’s drift and grab a boat hook and line to assist with the recovery.

The only reason I would ever consider starting closer than 10m away is if there is almost no wind or the casualty was face down. Aim to keep the boat beam-on to the wind and waves, with the casualty level with the helm.

You can use small clicks of ahead or astern to keep that position but be wary of using the engine when close alongside them. As you drift closer try to judge their movement and yours so that the MOB ends up alongside at the lowest point on your craft, usually the stern quarter.

I find a boat hook is the best thing to grab them with, then I like to pass a line round them and tie it off so I can’t lose them again. Now is the time to turn the engine off if there is any danger of it being knocked into gear.

Wet people are very heavy, so getting them out can be a challenge. If the casualty is able to assist, then deploying the bathing ladder or rigging a line from a cleat with a loop in it that acts as a step is your best bet. You could also use the hydraulic bathing platform if you have one or even get them to stand on the anti-cavitation plate of a large outboard motor while you raise it.

If they can’t help then you will have to drag them onto the platform. Keep your centre of gravity low as the last thing they need is for you to fall in too. If you can’t get them out quickly, then that Mayday call will be essential.

1. Calmly reduce your speed. Slow the boat down, using your wake to help spot and locate the MOB. Then turn upwind to come back around towards and to windward of them.

2. Bring the boat to a standstill. Stop at least 10m upwind of the casualty and roughly in line with the helm position. The boat should be parallel to the waves with the wind blowing across it. Here, I am indicating the MOB with the boat hook.

3. Let the boat drift towards them. Control the boat’s drift so the MOB ends up alongside its lowest point. Crucially, the boat is sheltering them from the wind and waves.

4. Grab the casualty. Once they are almost alongside use a boat hook to grab the MOB. Note how I am keeping my centre of gravity low to ensure I don’t fall in.

5. How not to do it! My body position is too upright, the weight of a person pulling on the hook could drag me overboard. I should be crouching right down.

6. Connect them to the boat. Having pulled them close to the ladder, use a line to secure them to the boat before attempting to lift them out just in case they fall back in.

GJW Direct offers some of the most comprehensive insurance polices on the market at very competitive prices To get a quote for your boat visit gjwdirect.com or call +44 (0)151 473 8000