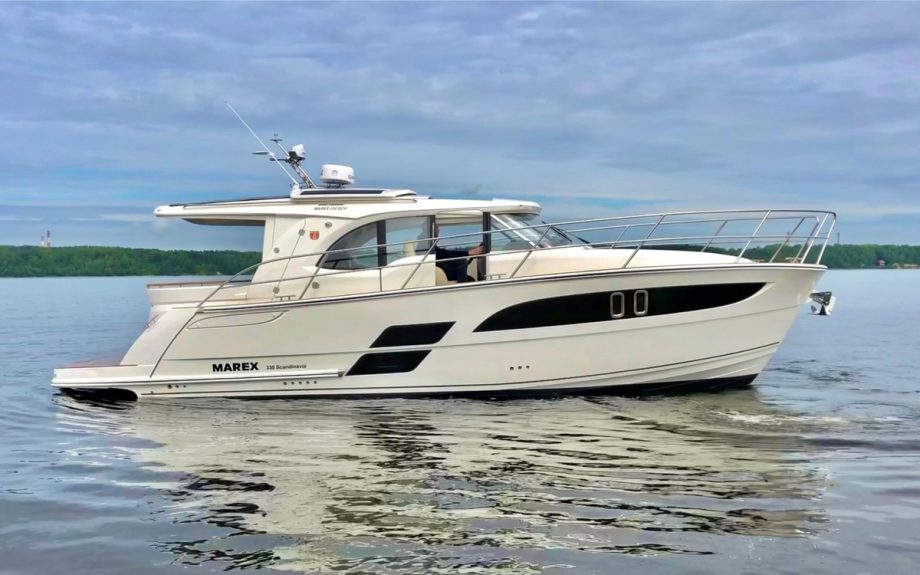 At the recent Cannes Yachting Festival, MBY deputy editor Jack Haines took the chance to tour the Marex 330 Scandinavia, which was making its global debut.

With rows and rows of glittering exotica to take in, it says a lot about the brilliant design of the Marex 330 that for us it was one of the stand-out boats at the 2021 Cannes boat show.

What Marex has managed to fit into a shell of these dimensions borders on miraculous and, as usual, the boat is finished to exacting standards.

Some elements may seem simple but it’s taken Marex’s genius design team to think of them, like the lifting sections at the aft end of each side deck that reveal perfectly shaped storage for all of the boat’s fenders.

An amazingly practical, impressively roomy, storage-rich, feature-laden jack of all trades, the Marex 375 has few peers

The famous curtain canopy system has also been updated and is better than ever, requiring just the pull of one bungee to become rain and windproof without the need to fiddle with numerous tie points.

Dinettes that convert to double berths in the cockpit and saloon supplement the two double cabins below deck meaning eight can sleep on board if needed and with single and twin engines on legs or shafts there is plenty of versatility on offer.

According to UK dealer Wessex Marine, demand for this new Marex 330 Scandinavia model is already very high. A prime example of this is the sliding door next to the helm, invaluable when single-handed, or if the skipper needs to help another crew member with lines and fenders.

Year-round usability was also high on the priority list so the ability to open and enclose the main deck using a combination of sliding doors, a pair of sliding roofs and Marex’s famous curtain canopies means the deck can be as exposed or protected as the weather allows.

This being a Marex there are a plethora of clever little details to make life on board that bit easier, like optional boat solar panels to boost the domestic supply if there isn’t shorepower, a roof rack to carry bikes or kayaks and the foredeck sun pad, which is waterproof and floats so it can be tossed into the water to be used as a platform for the kids to jump off.