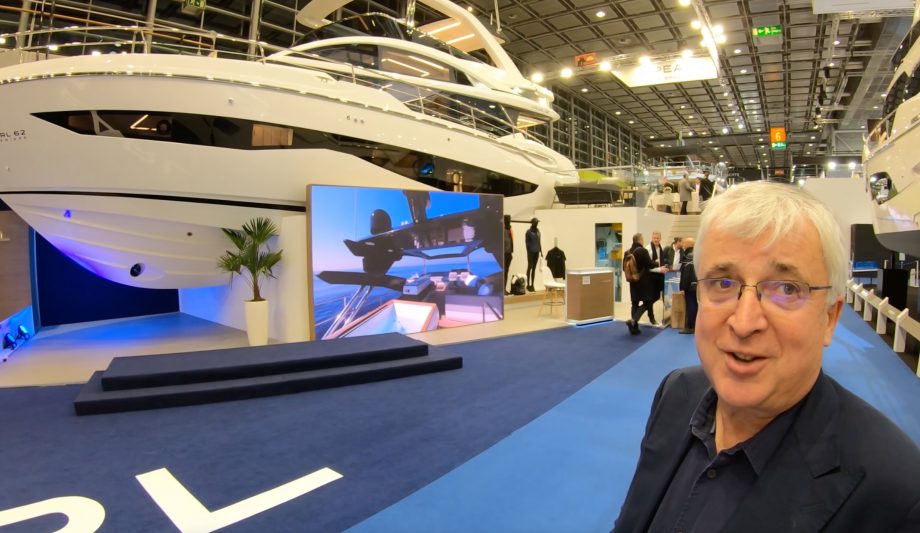 At this year’s Dusseldorf Boat Show, designer Bill Dixon took us on a guided tour of the new Pearl 62 to point out what sets his design apart from the pack

When you’re competing against the likes of Princess, Sunseeker and Fairline, you need something pretty special to catch the buyer’s attention and that’s exactly what Pearl has done with its new 62. None of its 60ft rivals can match its combination of four double cabins, separate access to the owner’s suite, IPS drives and either a crew cabin or a jetski garage.

It’s not just the clever packaging that marks it out, it looks good too with surprisingly sporty styling and a sophisticated interior. As with previous Pearls, it’s the unlikely pairing of naval architect Bill Dixon and interior designer Kelly Hoppen that has brought about this innovative take on a familiar flybridge recipe.

The key to the layout is those IPS drives which position the engines in the stern and free up space ahead of them for a full beam mid cabin. A private stairwell just inside the cockpit doors leads down to this, which thanks to a large hull window and lit display case becomes a feature in itself. Matt black fittings, grooved oak cabinetry and gentle curves distinguished the show boat but Kelly Hoppen offers four different design themes to suit most owner’s tastes.

The rest of the sleeping accommodation is accessed via a companionway at the forward end of the saloon, leading to identical twin cabins on either side with a shared bathroom/ day heads and a generous VIP suite forward.

The main deck comprises an aft galley with a drop down window and bifold doors linking it to the cockpit and a rather small four person dinette opposite, although one of the two sofas in the raised forward part of the saloon can be swapped for a larger dinette if requested.

The deck spaces are another core feature of the Pearl 62 with a mini beach club vibe at the stern created by an aft facing bench, a large hydraulic bathing platform and a garage lid that hinges up to slide a jet ski in or out on recessed rails. The foredeck also boasts plenty of seating and sunloungers with a foldaway table and sun awning.

But it’s the flybridge that takes centre stage thanks to a neatly integrated hardtop with a vast sunroof and three separate entertaining zones at the helm, wet bar and stern. The latter features a glass balustrade overlooking the transom and two small coffee tables that double up as stools for the dinette.

Provided the IPS drives and hull perform as promised, it’s a very appealing package that comes backed by an industry-leading five-year warranty.