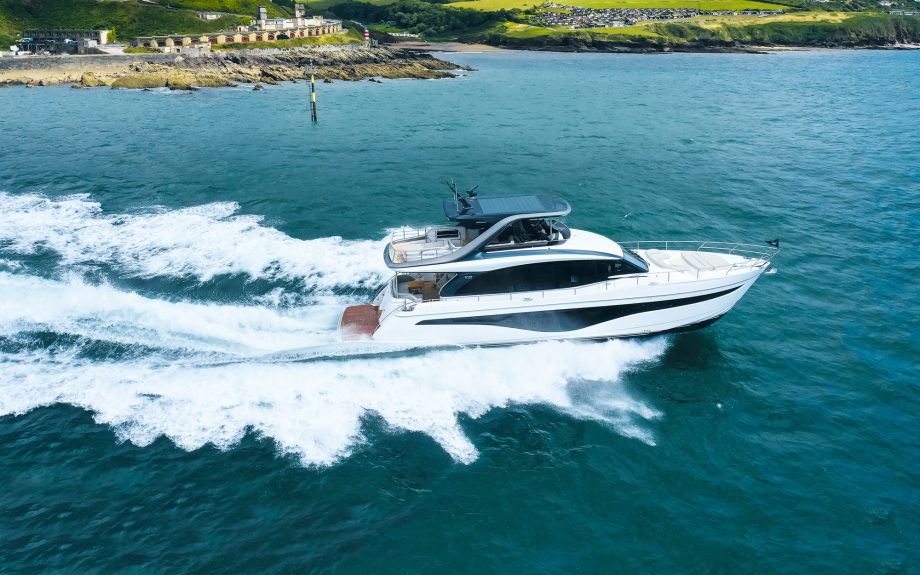 With storm clouds gathered over Plymouth, we took the opportunity to gain a true insight into the seakeeping ability of the new Princess Y72.

There has been no small amount of planning involved in organising our test of the latest addition to Princess’s Yacht range.

With boats in such high demand even pinning one down for a day to shoot it for the magazine proved a logistical headache and that was before the “pingdemic” meant that a significant proportion of Princess Yachts’ technical team had to isolate around the time our test was scheduled.

The last thing we needed was the weather throwing a final immovable spanner in the works but, despite it being the end of July, it tried its very best to do just that.

Plymouth Sound was fringed with threatening nimbus and a potent breeze howled in from the southwest, whipping up a challenging swell that simmered with foam.

We often lament the irony of testing big boats like the Princess Y72 in benign conditions; that most certainly was not the case on this occasion.

The Y72 is indeed a big boat, at 71ft 5in (21.8m) and nearly 52 tonnes half-loaded it is both physically larger and heavier than the Princess F70 it replaces.

Somehow, it feels even larger than the bare numbers suggest when you’re on board and despite being the smallest model in the Yacht range it feels more of a scaled down motoryacht than a large flybridge cruiser.

It’s a handsome thing, too, imbued with classic Olesinski lines, but breathed on by Pininfarina, with curves in all the right places.

Having negotiated the tight basin of Kingpoint Marina we headed west in hope of finding some relative shelter in the bosom of Cawsand Bay but this corner had become a safe haven for visiting yachts, all huddled together as close to the shore as they dared in search of maximum protection.

The call was made to head to the mouth of the River Yealm, which offered a decent burst towards the east with the worst of the swell nibbling out our hindquarters.

Read Jack’s full review of the Princess Y72 in the November issue of MBY, which is out now.