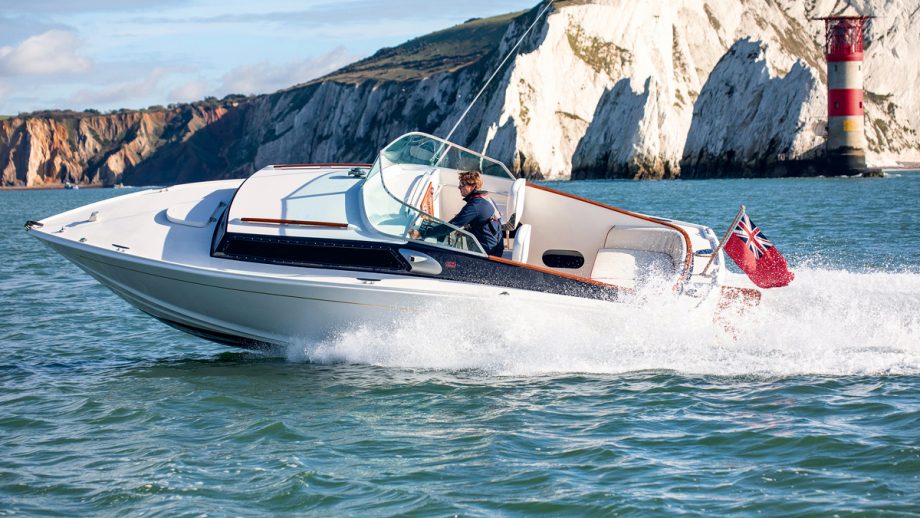 James Ensor’s first encounter with a Levi Corsair left him spellbound and galvinised his ambition to purchase and restore his very own dream boat. Motor Boat & Yachting editor Hugo Andreae jumps on board for a sea trial of his refitted 1968 Levi Triana...

Much of my childhood was spent making a nuisance of myself on the water; rowing on the river after school in Yarmouth, Isle of Wight, and discovering my uncanny ability to capsize sailing dinghies in almost any sea state.

I’m fairly certain that my subsequent introduction to internal combustion engines at such a young age not only shortened the life of several Seagull outboard engines but the Yarmouth Harbour Master’s too.

Before long I learned to ski behind my father’s 1969 Poole Powerboats Sovereign 17 (the forerunner of Sunseeker), which has stayed in the family ever since.

It was watching the Cowes-Torquay race boats hammering through Hurst Narrows that further drew me to fast motorboats: the speed, shape, sound and thrill of seeing these monster offshore powerboats left a lasting impression on my adolescent mind.

The moment that really set me on the path towards my latest obsession, though, was working as a boatyard apprentice on the restoration of a Levi Corsair 27 called Flora McDora in 1996. Anybody who has been involved with a boat restoration knows that it isn’t only fibreglass dust that works its way under your skin.

The boat’s design, build quality and styling details fascinated me. As a reward for my efforts, I was treated with a blast round the Solent in the newly restored Levi – the experience was everything I hoped it would be and more.

Shortly afterwards, I managed to speak to Sonny and Martin Levi on their stand at the Southampton Boat Show. Speaking with the duo was the icing on the cake.

I’d been bitten by the Levi bug, a self-inflicted infection for which there is no known cure. At the time, I was still sailing at regattas all over the world from Cowes to the Caribbean but this meeting put a stop to my internal struggle between horsepower and halyards.

It was now abundantly clear to me that life was better at 40 knots than four. I had also come to terms with my love of classic craft.

To my eyes motorboat design had lost its way some time around the 1990s: large motor yachts were becoming a floating extension of the owner’s home and smaller boats were aimed at first-time buyers stepping straight from behind the wheel of a car.

The connection between man, machine and the sea had diminished. Obviously, dreaming about Levis and actually owning one are two very different things. However, the element of chance can be a powerful catalyst.

Having lost many hours trawling the internet for a viable and affordable Levi Corsair restoration project, I had almost given up on the idea and resorted to buying a RIB when fate intervened.

While working on a boat in Yarmouth Harbour and mulling over how big an outboard I could get away with bolting onto my forthcoming RIB, a Levi 27 called Blue Corsair arrived on the neighbouring finger pontoon.

The poor owner didn’t stand a chance. He’d barely secured his lines before I engaged him with a barrage of Levi-related crossfire.

In an effort to get rid of me he mentioned that he knew of a Levi Triana 25 owner based on the Thames, who may be willing to sell, and he offered to connect us.

Read more about James’s Levi Triana refit in the November 2022 issue of MBY, which is out now.