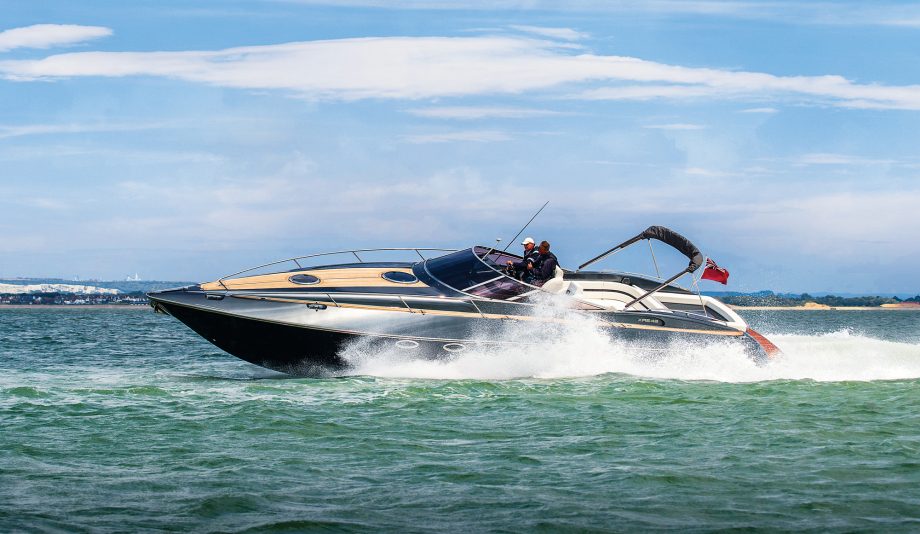 Inspired by a story in last October’s MBY, Nigel Meek set out to create his own perfect performance cruiser by refitting a Hunton XRS43

My boating career started with racing sailing dinghies in the Solent. It was a natural progression from there to windsurfing and I whiled away many happy weekends blasting around the Solent on a variety of ever smaller, faster boards.

Then came the children, bless them. Sadly, the ethos of windsurfing (stop everything, the wind has started to blow) is more or less the exact opposite of trying to bring up a young family and it wasn’t long before the windsurfing gear was hung up and a year later sold to raise cash.

When I hit my early thirties, work was going well and I decided to buy a brand new Four Winns sportsboat. I’d never really expected to move from sail to power but with our busy family oriented life, it worked fabulously. Dry stacks weren’t around back then, so it was kept in the water at Ocean Village marina.

We had some fabulous times on that boat and after a while we upgraded to a Sunseeker Portofino 37. It cost a small fortune to run so after a couple of years we got rid of it and entered the world of RIBs, starting with a 7.5m before upsizing to an 8.5m. We kept it on a dry stack on the Hamble and the flexibility this gave us suited our busy lifestyle, allowing us to ‘RIB around the Solent’ for many happy years.

However, last year at the age 54 and coupled with my wife’s bad back, I began to look around for a more comfortable option. The trouble was I didn’t want a flybridge or even a sportscruiser, I enjoyed the exhilaration of helming a RIB too much to swap it for a comfortable but boring 30-knot cruiser. I also wanted a boat of around 9 to 10m long to flatten out the sometimes choppy Solent. So I spent some time trawling the internet wondering which way to go.

Then I happened on an article in MBY which followed the story of a reader who couldn’t afford the new boat he wanted so spent the money instead on refurbishing a secondhand Sunseeker Superhawk 50.

It got me thinking. Funnily enough I had a friend who years ago had a Sunseeker Thunderhawk. It was a great boat with big petrol engines – utterly mad but so much fun!

So I started looking at some slightly older secondhand boats as well. Then it struck me, I had seen a few Hunton XRS43s around and even had the good fortune to have been on one a few years previously.

This seemed to be the best fit. For me it was a true modern classic. Compared to the Hunton, even the Superhawk looked rather dated. So I started my search. The more I looked, the more I wanted one. And the more I thought about it, the more I began to see a way of taking it to an even higher level.

I was strongly recommended to speak to Hunton guru Martin Payne. He used to be the MD of Hunton and still keeps track of where most of his boats have gone.

Speaking to Martin it soon became clear that finding the right boat wasn’t going to be as easy as I’d hoped. It seems that Huntons are rather more sought after than I’d realised, even with Martin helping to extract a boat for me from an existing owner.

Whilst Martin was churning opportunities, I also looked at alternative options in case we drew a blank. I went to last year’s Cannes boat show to see the debut of the new Princess R35 foiling sportsboat but it really didn’t ‘float my boat’.

The driving position felt more cruiser than sportsboat, the accommodation was very tight down below and in my opinion it lacked a bit of soul… whatever that means!

Cannes was still a great show with countless open day boats and fast weekenders but nothing that made me change my mind about a Hunton – it just ticked all my boxes. The show also helped me with ideas for how I wanted my Hunton to look.

Some of the boats on display had lovely modern finishes that would be perfect for my refurbishment plans. So on my return to England, I tried to remain patient while Martin pursued various leads.

Eventually Martin found me a potential seller. The boat had been registered in 2012 and had spent the intervening years in Monaco. I flew down there with a friend who had once owned a Hunton. The boat was in a pretty poor state cosmetically but was structurally and mechanically very sound.

I made an offer close to the suggested price. We haggled a bit before settling on pretty much what the owner wanted. He really didn’t want to sell it but he hadn’t been using it enough and I think it broke his heart to see it in the state it had got into.

He must have been struggling to part with it as even after agreeing the deal, he changed his mind about selling it. All my plans of commissioning a survey, repatriating it to the UK, finding suitable dry storage and making arrangements for the refit went into freefall.

To be honest I got so fed up that I came close to giving up entirely. Martin, however, was really quite exceptional and late last year he assured me that the seller was back on board for good.

I flew down with a surveyor and two mechanics before he could change his mind. The boat was given the thumbs up with everyone doing their best to look past the cosmetics and the deal was on.

I had a stressful few days when my bank transfer to Monaco left my account but took nearly a week to clear the other end, but the minute the funds were received, I had a skipper take the boat to Arie De Boom’s servicing facility in France. They proved to be exemplary with a great attitude – I can’t recommend them enough.

To find out how Nigel’s Hunton XRS43 refit progressed, read the October 2019 edition of MBY, out September 5.