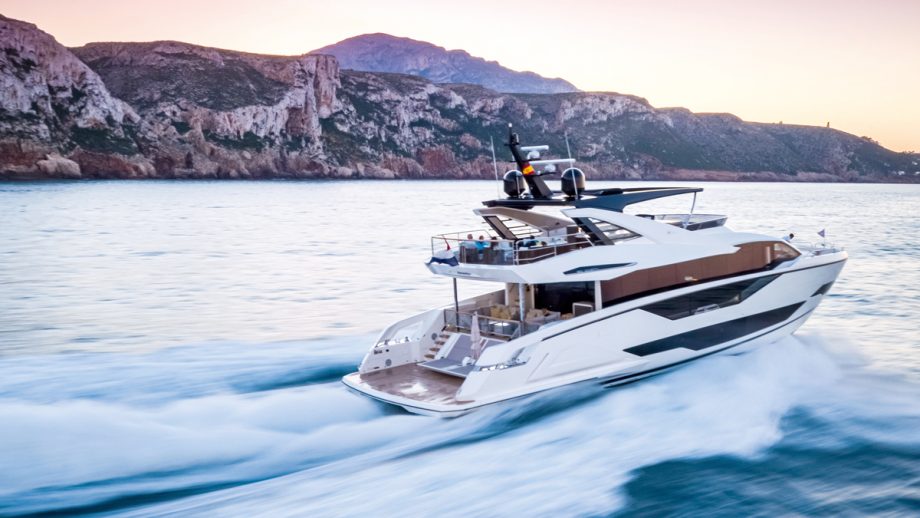 The 90 Ocean is the biggest shake up in Sunseeker’s design language for years but, incredible beach club aside, what else does this brave new model bring to the table?

With the 90 Ocean, Sunseeker has resoundingly confirmed where the latest boat design battleground is taking place. First it was the amidships owner’s cabin, in the middle of the boat stretching the full width of the boat’s beam and flanked by enormous water-level windows.

Then the fight moved to the foredeck. No longer would a solitary slab of sun pad be sufficient so now we see sun pads with movable backrests, sofas, tables, pop-up lights, fridges, speakers and canopies for a bit of shade when it gets too hot.

These days the focus is at the other end of the boat, however, in the battle of the beach clubs. Sunseeker has been ramping up this trend for some time on its smaller models with transom-mounted barbecues and benches, storage for Seabobs and dive tanks, lighting and overhead showers, stretching the beach club moniker within an inch of its life.

But the Sunseeker 90 Ocean takes things to an entirely different level with living space of such epic proportions and functionality you question why you would want to spend time in any other part of the boat, which is saying something given how pleasant the flybridge and foredeck are.

Firstly there is the sheer size of the aft deck. The Sunseeker 90 Ocean is over 2ft wider than the Sunseeker 88 Yacht and nowhere is that extra beam felt more acutely than when standing here in the midst of all that acreage.

There is a hydraulic platform integrated seamlessly into the deck but when lowered it leaves a narrow strip in place on the port side so there is always somewhere to stand at deck level even when the platform is in the water.

This is also how you launch and recover the tender. If you’re into your water toys then the Sunseeker 90 Ocean won’t disappoint because between the deck space, where you can stow tenders and jet-skis, and the two dedicated lockers for Seabobs with charging points, there’s plenty of fun to be had.

The Sunseeker 90 Ocean in all its beach club glory

Chuck in a mounting point for a parasol, shower connection and a barbecue grill that folds out from the starboard coaming and you have quite the entertaining space. But that is only the start.

The X-tend seating may be an eye-watering £117,000 option but buying this boat without it would be like going to Raffles and not ordering the Singapore Sling. The mechanism comprises a huge clamshell with a two-way hinge mounted on a pair of hydraulic rams.

Hit one of the myriad buttons in the panel on the aft deck and the entire lot rises up in similar fashion to a tender garage, only here it reveals the aforementioned storage and charging lockers set into the transom.

Once aligned with the cockpit, hit another button and the top section of the clamshell opens to become the backrest on an enormous pair of angled sunbeds that face into the cockpit stretching the full width of the terrace.

Another button returns the seats to their original position on the aft deck where the clam shell folds down, this time positioning the sun beds at beach club level overlooking the water. It is without doubt one of the coolest features of any boat I’ve tested and creates one of the finest living areas of any 90-footer on the market.

The beauty is that there is still the familiar raised cockpit with dinette and chairs just above the aft deck but thanks to the four-way split glazed transom doors you can open this area up to the beach club and create an Infinity pool effect overlooking those who are chilling out at water level. This is how a beach club should be done.

The seating raised up in cockpit mode

That said, if the beach club is a little too splashy and action packed for your taste there are a host of other outdoor spaces to enjoy. The 90’s wheelhouse sits quite a long way forward on the main deck so the foredeck isn’t enormous but the use of space is really good.

There isn’t room for a central table so Sunseeker has made a teak-topped bar area with cupholders and pop-up lights at the head of the sunbed instead. This and the cosy dinettes that flank it on either side create a beach club vibe all of their own.

The flybridge is vast and seemed especially spacious on our test boat because there was no furniture at its aft end. This area can be furnished in any way the customer desires, while amidships the dinette can be specified with either a fixed or hi-lo table.

Having opted for a slatted sunroof for the 88 Yacht’s hard top, Sunseeker has reverted to a canvas version so huge that once open it feels as though the sky might fall into it.

Customisation is a key component here but a lot of it has been built into the package to ensure production isn’t hindered by outlandish personalisation requests. Wood finishes, colours and furniture styles are plentiful but the physical layout of the saloon is also up for grabs.

Hull number one, for example, which was at the 2021 Cannes Yachting Festival, had its dining table to port alongside the floor-to-ceiling window whereas the boat we tested in Poole had its table aft of the galley on the starboard side.

The galley can be open or enclosed with sliding panels

The owner of this particular boat wanted some more relaxed seating next to the vast window, somewhere to really soak in the views through the extraordinary glass area.

The galley is well equipped for long stints on board thanks to its abundance of storage and domestic-style appliances but there is also the option to leave the space open to the saloon or enclose it with three sliding panels.

On crewed boats this will be particularly useful and means that crew can partition themselves off from guests when they’re dining in the saloon but thanks to a side door adjacent to the gallery can still get out onto the decks to serve the rest of the boat.

If the boat is owner-run, however, or the relationship with crew is less formal, the open galley layout opens the space up and makes it feel sociable.

The arrangement of the lower deck is clever. There are two access points to the accommodation deck with a central companionway forward that leads down to the VIP ensuite and another one adjacent to the galley that winds down to a lobby off which there are two further guest ensuites and the full-beam master.

The reason it works so well is because of its flexibility. If the owner has guests on board with kids then you can give them the master cabin and guest suites amidships and use the separate VIP as a private oasis or if the owner is on board with their family and a have a couple of guests on board they could do things the other way around and have the middle of the boat to themselves, giving guests a quiet space forward. This configuration also works well for charter.

The other benefit of this arrangement is how well insulated the master cabin is from the machinery space because between it and the engineroom bulkhead are the two guest suites and the crew space so it’s very unlikely that those in the master will be disturbed by the generator or stabilisers at night.

The boat’s refinement comes to the fore out on the water, too. Charging along at the 28-knot top speed of our test boat we registered a noise reading of just 65dB(A) at the lower helm, pretty extraordinary given there is nearly 4,000hp churning away in the bowels of the hull. At the time of our test 18 out of the 20 Sunseeker 90 Oceans delivered were fitted with the same twin 1,900hp units as our test boat.

One had the 1,650hp motors (possibly a bit underpowered with a full cruising load) and the other had the upgrade to the 2,000hp blocks. The 1,900s suit the 90 down to the ground and with a colossal 13,000-litre fuel capacity provide incredibly flexible cruising capability.

If you’re chasing down the last berth in the port then you can whip along at 25 knots no problem at all but ease the revs back to 1,000rpm for a speed of 10 knots and the boat will comfortably cover 1,500nm with 20% in reserve.

With Sunseeker there is always the shadow of heritage and reputation for performance and handling looming large over every model, even one as large as this. The 88 Yacht is a case in point, it’s a phenomenal boat to drive given its size but surely the Sunseeker 90 Ocean with its added beam, weight and gadgets can’t deliver the same surprise?

It isn’t quite as sharp as the 88 Yacht but it’s still ridiculously engaging for something of such epic dimensions. Both helm stations are set quite a long way forward so the boat appears to shrink around you, especially at the lower helm where you feel so close to the bow.

The lower helm has some of the most comfortable helm chairs I have ever sat in with soft leather, plush footrests and multiple adjustments at the touch of a button. The dash is handsomely designed with a charging dock for both a tablet and a smartphone, and because you sit a long way forward the view out is excellent.

However, the position of the galley makes it pretty much impossible to look aft without sticking your head out of the side door or asking a crew member to look for you when making a hard turn.

No such issues at the upper helm, though the chairs take a bit of a downgrade. It’s not that they’re uncomfortable, far from it in fact, it’s just that they could have been plucked from any model in the Sunseeker range and don’t quite possess the sense of occasion that should come with helming from the flybridge of £7million mini superyacht.

Really, these are miniscule flies in an exquisite pot of ointment. The 90’s beach club is its USP, without a doubt, but that doesn’t mean Sunseeker has let focus drift away from the rest of the boat.

The other deck spaces are just as impressive and the proportions and layout of the sleeping accommodation make this an incredibly versatile boat to cruise aboard, with or without crew and whether or not the owner intends to put it out to charter when they’re not using it.

Most pleasing of all is that despite all of the gizmos and the volume and the living space it still drives and performs as well as a Sunseeker ought to.

Update: The Sunseeker 90 Ocean is due to go on display at the 2022 Southampton Boat Show.