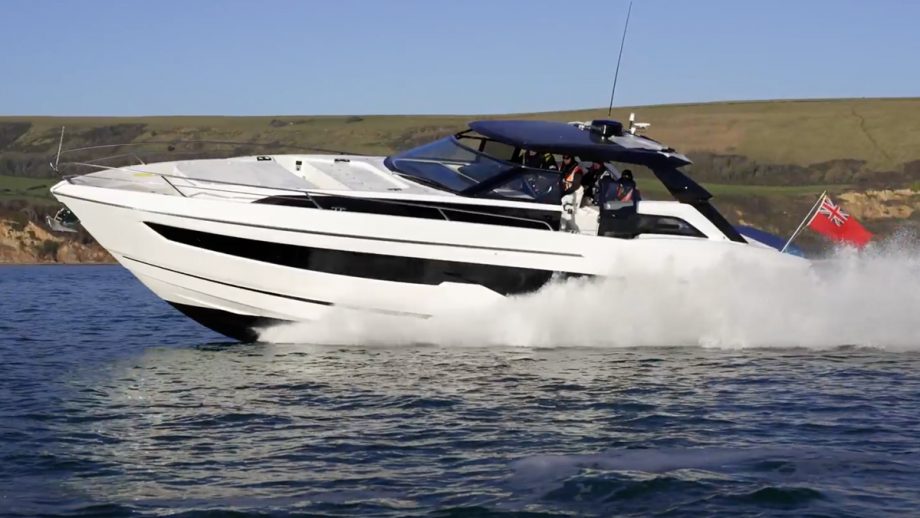 Reporting from the 2023 Boot Dusseldorf Boat Show, MBY editor Hugo Andreae takes us on a full tour of the Sunseeker Superhawk 55, which was making its global debut...

Sunseeker revealed the hotly-anticipated Sunseeker Superhawk 55 over the weekend at the 2023 Boot Düsseldorf show and MBY was among the first to get on board.

Elsewhere there have been tweaks to the design to improve performance: the generator and gyroscopic stabiliser are mounted on the centreline to keep the weight and centre of gravity as low as possible, and there are short carbon fibre jack shafts between the engines and the IPS pods to keep the weight slightly further forward.

Construction includes three big mouldings (for hull, liner and deck), 84 small mouldings and 116 pieces of furniture, making this the fastest, most efficient boat to build in the current Sunseeker range.

Surprisingly wide, deep side decks with quite tall bulwarks for this size and style of boat make it safe and easy to access the foredeck lounge.

Both the cabins are similar in size. The forward one has slightly better headroom and is nominally the owner’s cabin but its bathroom doubles as the day heads. The aft cabin can be split into two singles, but it feels more private so we suspect that some owners will choose this one.

Coachroof windows and skylights under the windscreen, in addition to hull windows, make for a light interior. Key features in the lower saloon include a rise-and-fall TV, LED lighting and electrically-operated blinds.

What’s more, the central section of the tender platform can be lowered into the water. This can carry a PWC in addition to a Williams Minijet in the funicular tender garage, but we’re yet to see how all this gear will affect performance.

This design is already proving very popular – Sunseeker had taken 20 deposits at the time of our factory visit in early August 2022.

Speaking last month, Sunseeker CEO Andrea Frabetti commented: “The launch of the Superhawk 55 is exciting for all involved, and we are thrilled to see the first hull embark on final sea trials. The Superhawk 55 is a halo product of future models developed from a proven design philosophy, becoming an icon in its own right.”

As the first all-new Superhawk in more than a decade, the launch of the Superhawk 55 marks a spectacular return to the open-cruiser market.

With its sharp new look, the Sunseeker Superhawk 55 sees the British yard return to a focus on sporty handling that we haven’t seen since the Superhawk 43 disappeared from the British yard’s books back in 2009.

Although a taller, beamier, more luxurious iteration of the famous Superhawk name, as befits today’s more accommodation-hungry market, its performance heritage is clear.

That long, lean profile, the wraparound glazing with a complex double-curved windscreen and a dominant new central helm position flanked by two navigators’ seats (another first for Sunseeker) speaks volumes about its sporting intent.

The forward cabin is nominally the owner’s suite, but the amidships cabin is of a similar size

We particularly like the pantograph doors in the sidescreens that connect the cockpit to the side-decks. And check out those neat Union Jack homages in the transom gates and skylights under the windscreen.

The cockpit layout is intended to be versatile but with a focus on fun in the sun. Highlights include oversized three-person sun pads, L-shaped corner seats that slide in towards the table for dining, and a huge central wetbar with all the mod cons including a pop-up waterproof television.

The forward sun pad also slides forward to reveal a second hi-lo table and foredeck dining area, while the aft one conceals a large watersports drawer for waterskis, inflatable SUPs and other water toys.

Union Jack transom gates are a bit of fun. Bathing platform lowers to reveal tender garage for a Williams 325 and two Seabobs

Although the initial renderings showed a fully open boat, Hull #1 features a carbon fibre hard top, which is likely to be popular among UK boater who tend to need more protection from the elements.

The big change from previous Superhawk models is the size and quality of the below decks accommodation. Rather than being a slender speed machine, the new Superhawk 55 features a sizeable lower saloon and galley amidships plus two separate ensuite cabins.

The new powertrain is also less extreme than some of the Superhawk 55’s predecessors. Twin 725hp Volvo Penta IPS950 pods are the only choice, and look to deliver a top speed of 40 knots at half load in cool-water latitudes, although Sunseeker is underplaying its potential by quoting a top speed of 38 knots.

Prices start at £1,395,000 excluding taxes but we are assured the standard model comes with a high turnkey specification. The only big-ticket options will be the hardtop, Seakeeper 6 stabiliser and a bigger generator, ideal for boats bound for the tropics that will need to run full air conditioning.

“I’ve been badgering Sunseeker to build a new Superhawk for years so I’m thrilled it has finally bitten the bullet,” says MBY editor Hugo Andreae. “I love the way it looks and am sure this bigger, more luxurious iteration will be a roaring success but a part of me still wishes it was a pencil-thin speed machine capable of 50 knots.”

The Superhawk 43 boasted a top speed of 48 knots.

Having prepared the ground for performance-focussed open boats in the early 1980s with models such as the XPS34, Monterey 27 and Mexico 24, Sunseeker’s first real ‘Hawk’ was the hugely successful Tomahawk 37, 292 of which were sold between 1987-1992.

The Mohawk 29, Hawk 27 and Thunderhawk 43 followed in quick succession before the first Superhawk, the 50, was launched in 1991.

This was followed by the Tomahawk 41 before a string of Superhawks of different lengths picked up the baton. Arguably the most famous of these was the Superhawk 34 (1997-2004), that starred in the epic River Thames chase sequence in the Bond film The World is Not Enough.

However, in terms of numbers sold (330) as well as their outrageous looks and performance, it was the Superhawk 48 and Superhawk 50 (1995-2005) that stole people’s hearts.

The latter’s triple-surface drive configuration had a top speed of 50 knots and an outrageously long, pointy foredeck.