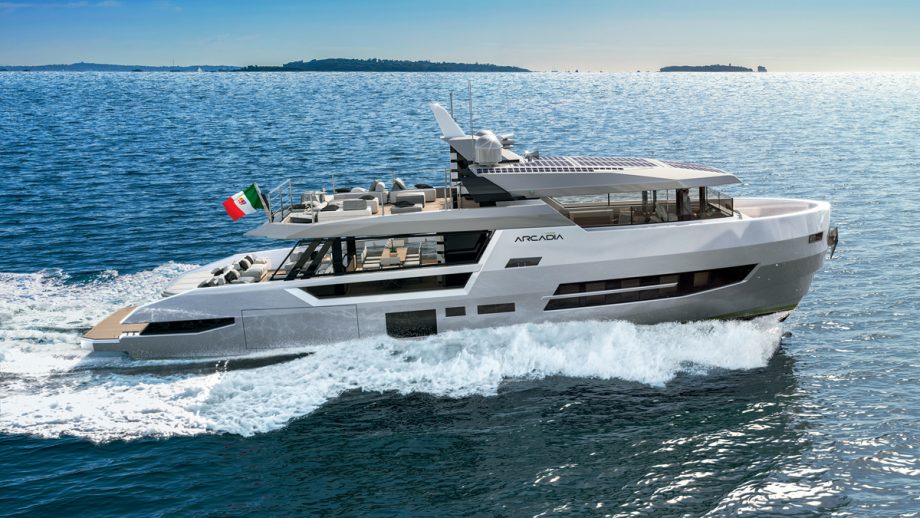 Nick shows us around a fascinating and fantastically alternative take on the 24m yacht, the Arcadia Sherpa XL…

In this video, filmed at the latest edition of the Dusseldorf Boat Show, Nick Burnham takes us inside the Arcadia Sherpa XL and explains what makes it unique.

Described by Arcadia as a “pocket mega yacht” the Arcadia Sherpa XL builds on the rather unique platform introduced on the original 60ft Sherpa launched in 2015.

The beauty of this boat is that despite all the living space (around 220 square metres), there are no overhangs, so the hull length is exactly the same as the length overall and still ducks just below the 24m threshold that would require the skipper to hold a commercial licence.

The boat’s super modern interior styling may not suit all tastes but few will complain about the vast main deck entertaining area or the generous three-cabin layout.

The owner’s cabin has no partitions and is open to the ensuite bathroom, boosting the feeling of space, and if extra sleeping room is required the galley moves up to the main deck to allow for an extra guest cabin.

There are dedicated companionways for the crew, meaning they needn’t disturb guests when going about their work.

A raft of solar panels atop the pilothouse and the use of low energy LEDs and appliances mean the domestic circuit can be run off solar energy alone.