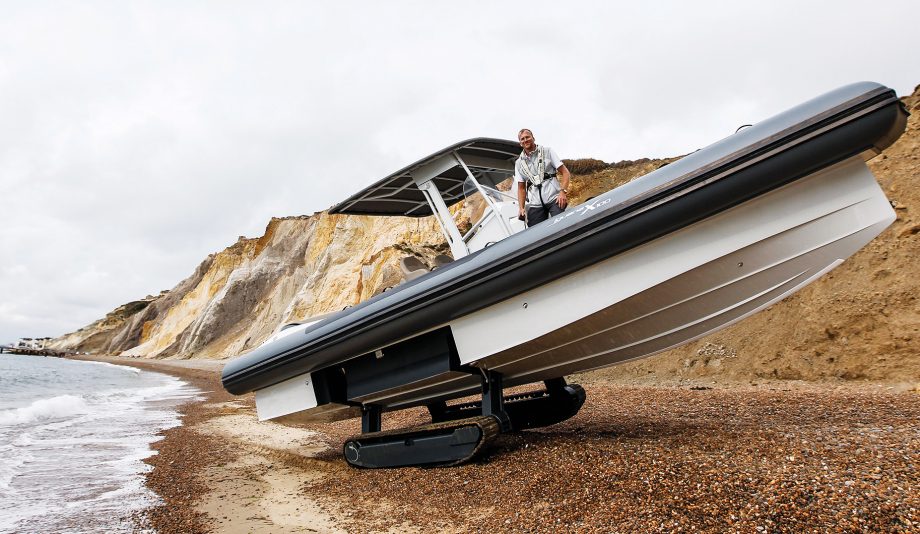 Gone are the gleaming white topsides of Iguana 29, with this Iguana X100, the amphibious boat pioneer has gone for the rugged look

The original Iguana 29 amphibious boat was a brilliant piece of design and a very capable craft both on and off the water. It’s only real weaknesses were that its looks and layout were more superyacht tender than rugged, go-anywhere machine and the price reflected that too.

This new Iguana X100 uses the same 10m hull and folding caterpillar tracks but with an inflatable RIB collar that not only protects the topsides and makes it a drier, more stable boat but also gives it a more utilitarian look.

The same goes for the cockpit layout which boasts a more convivial seating arrangement, a better protected helm with optional twin suspension seats and a heads compartment under the console.

We’re still talking Range Rover Sport rather than Land Rover Defender but it brings the Iguana concept and aesthetic much closer to the kind of versatile RIB or day boat that most people are looking for.

It even costs less than the original with prices now starting at €220,000 ex VAT – close enough to tempt owners of rival amphibious craft and even some high-end RIBs to take a closer look.

Having recently tested both the AMP 8.4 and Sealegs 9m Hydrasol, I was particularly interested to see how the Igauna X100 compared to these direct competitors.

The first thing to note is that the X100 is an appreciably bigger boat than either of them. Despite its carbon fibre reinforced hull, it still weighs over a tonne more than either of its competitors and really needs twin engines to give it sufficient grunt.

The Sealegs 9.0m Hydrasol allows you to explore the parts that other craft can’t reach, as we discover on a

That said, the twin 300hp Verado V8 outboards fitted to the test boat (a €45,000 upgrade) were verging on overkill, delivering searing mid-range acceleration and a top speed not far shy of 50 knots in flat water.

Read our full review of the Iguana X100 in the November edition of Motor Boat & Yachting, out October 10.