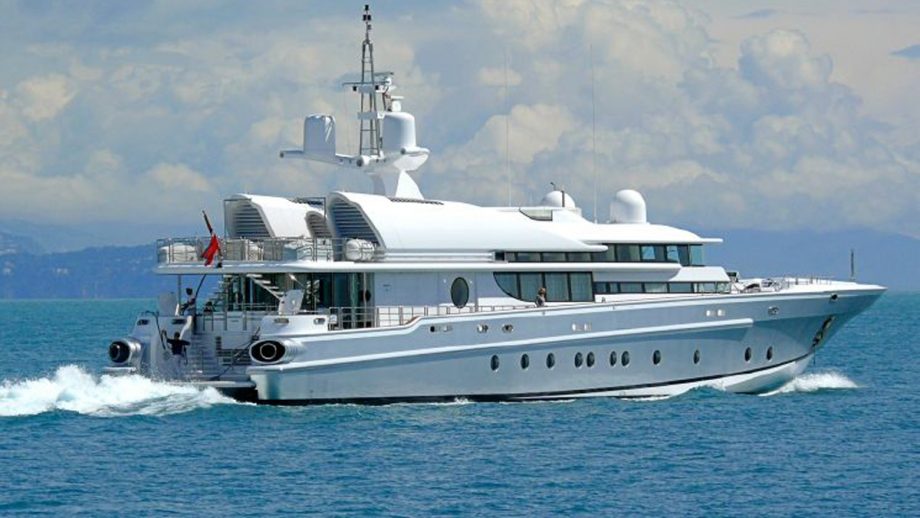 Thunder is quite simply the most astonishing superyacht Nick has ever had the pleasure of touring. This is the superyacht as performance art.

Rather than just building something with the most amount of rooms, the ethos of the 164ft Oceanfast superyacht Thunder was to build something that makes you go ‘Wow!’ when you walk on board, and then does it again when the captain hits the throttles!

Built in 1998 to a design by the late, great Jon Bannenberg, the brief was to create a 50m superyacht with six cabins that could go from Saint Tropez to Portofino in a day.

To that end, she was fitted with a pair of 2,960hp MTU V16 engines, paired to Kamewa water jets and gas turbines, giving a top speed of 34 knots.

Perhaps predictably, that incredible performance comes at a cost in terms of fuel consumption – a whopping 2,750lph!

As if that wasn’t impressive enough, the interior of Thunder is even more remarkable. Refitted in 2016 to a design by the fashion guru Roberto Cavalli, the decor screams opulence, making the most of the 10ft headroom afforded to guests relaxing in the saloon.

Other stunning features include the day heads wash basin, which is a work of art in itself, comprised of a geometric skull that Cavalli calls ‘Brainwashing’.

When Nick filmed this video at the 2020 Miami Boat Show, Thunder was offered for sale with Denison Yachting, priced at $10.8M.

She has since had a price reduction to $8.8M and is now offered for sale with IYC following a 2021 refit.