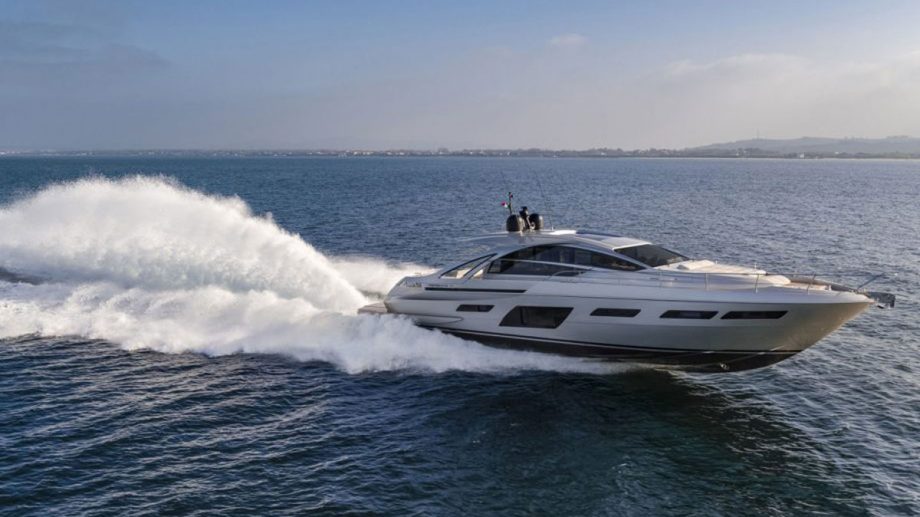 It is reassuring in these uncertain times to glance into the engineroom of the latest model from Pershing. There you’ll find five tonnes of Bavarian muscle, bulging with potential energy. Some things, thankfully, don’t change.

Surface drives, too: the new Pershing 7X may be nearly 70ft long and displace 42 tonnes in full cruising trim, but it’s still a no-nonsense speed machine that is reputedly capable of 50 knots.

Although similar in size and concept to 2014’s Pershing 70, the new 7X is a significantly different beast, most notably in its construction, which uses a lot more lightweight carbon fibre, along with lighter alloys, and even lighter materials in the fit-out.

It retains the clever disappearing glass bulkhead that the shipyard pioneered, which slides down into the floor to turn the saloon and cockpit into one spacious area. It also features a new cockpit layout, with a rear-facing bench seat – there is, after all, no point in creating a huge rooster tail unless your guests can admire it in comfort.

The saloon seating is now concentrated to port, leaving a clear walkway down the starboard side, and includes a sort of raised chaise longue across from the helm, to create headroom for the galley beneath. With its sensible steel rail it bears an unsettling resemblance to an A&E trolley.

In another change over the Pershing 70, the optional third cabin down below is now on the starboard side, and can be replaced if you prefer by a roomy seating area with folding table, conveniently situated opposite the galley.

There is also a spacious full-beam owner’s cabin, complete with its own ensuite, and a VIP double in the bows. The single crew cabin amidships is inevitably small, and accessed via that aft-facing cockpit seat. It comes as standard.

The most visible change over the earlier model is a redesigned deck moulding, with its curvaceous bulge beneath those swooping ‘wings’ – which were first unveiled on the Pershing 5X and initially intended as merely a styling signature, until it was discovered that they did a useful job of funnelling the airflow aft and keeping spray out of the cockpit underway.

But what about that claimed top speed? The Pershing 70 we tested was a couple of tonnes heavier than the new model, with 350hp less in the engineroom. It managed just over 46 knots. So it might be close, but 50 knots for the Pershing 7X sounds realistic.