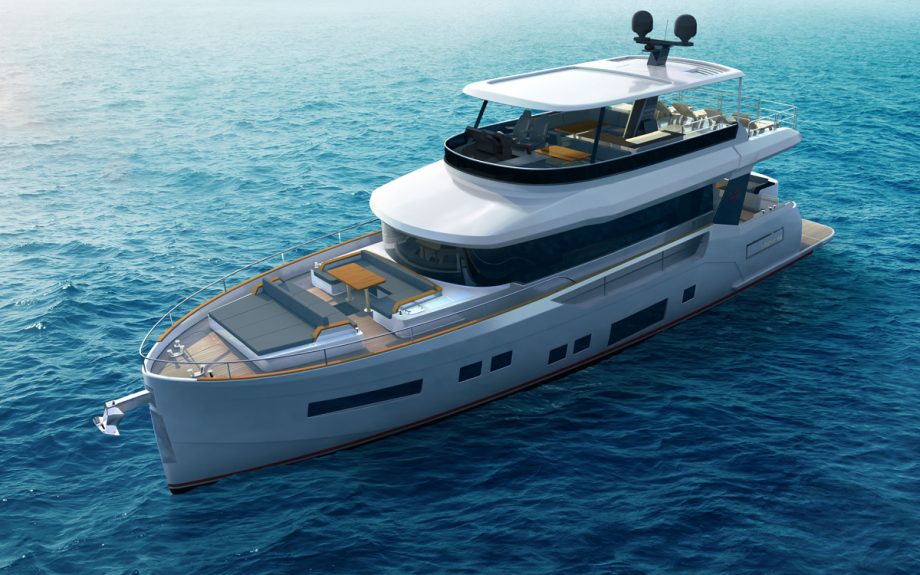 At the recent Cannes Yachting Festival, MBY deputy editor Jack Haines took the chance to tour the Sirena 68, which was making its global debut.

The Sirena 68 we toured at Cannes was sporting the bigger of the two engine options – twin 1,000hp Volvo Penta D13s, which give a top speed of 28 knots.

However, it’s the modest fuel burn rate of 38lph at 10 knots combined with its 5,250-litre tank capacity that will be more relevant to most owners. Factor in a Cat A RCD rating and you can really make the most of its claimed 1,200mile cruising range.

The starting price is €1.9 million (ex. VAT) and for that money you get a really interesting layout. Sirena has really come on leaps and bounds since they launched their their first boat, the Sirena 64, just a couple of years ago

There’s some really good thinking going on aboard this boat. With styling by Cor D Rover and a brand new semi-displacement hull by renowned naval architect German Frers, there’s no doubting its design pedigree. And there’s no shortage of space or luxury either.

The heart of the yacht may be its impressive main deck that incorporates an open aft cockpit, galley, dining area and inside helm all on one continuous level surrounded by acres of glass but it’s that long, extended flybridge that caught our eye.

Forget the usual excuse for a wetbar, the Sirena 68 boasts a massive three-sided outdoor galley with a full-sized stainless steel BBQ, a two-tier bar complete with stools and more fridge space than some supermarkets.

Despite this there is still room for a second big storage unit opposite, two free-standing sunloungers aft, and not one but two large lounging/dining areas further forward as well as a stylish two-person floating helm station.

As if that weren’t enough there’s another sociable chill-out zone on the foredeck for soaking up the rays and sipping cocktails under way.

Multiple layout options below decks allow for three or four guest cabins. In both cases the owner enjoys a full beam midships suite with a bathroom on one side and either another bathroom or a walk-in wardrobe on the other, helping to insulate the sleeping area from engineroom noise.

The VIP suite is forward with space in between for a generous twin cabin and a bunk cabin opposite. There’s even a proper crew area aft with its own mess, heads and bunks.

Update: The Sirena 68 is due to make its US debut at the 2021 Fort Lauderdale Boat Show.