We pick out 15 of the best new boats heading to Britain’s biggest boat show, the 2021 Southampton International Boat Show.

It hasn’t been easy getting to this point, but the Southampton International Boat Show is almost back!

This weekend will see Mayflower Park reopen its temporary marina for Britain’s biggest boat show and there will be dozens of brand new boats waiting to be admired.

There’s too much to see in a day, so we’ve picked out 15 of the best boats appearing at the 2021 Southampton Boat Show that you should make a beeline for, from a 27ft wheelhouse cruiser to an 88ft Italian explorer yacht.

Early last year, Bavaria acquired the rights to construct the NEO after Greenline felt the outboard-powered sportsboat didn’t fit in with its eco-friendly message and this is the first time we can see Bavaria’s take on the 36ft sportsboat at a UK show.

The boat, now dubbed the Vida 33, fits neatly into Bavaria’s portfolio which, up until now, has lacked an outboard day boat.

Something that dogged the NEO was its pricing but the Bavaria Vida 33 is available in Open form with twin 150hp Mercury outboards for under £157,000 inc VAT. Not bad when you consider it has a decent cabin below decks and a separate shower room.

Read more about the Bavaria Vida 33 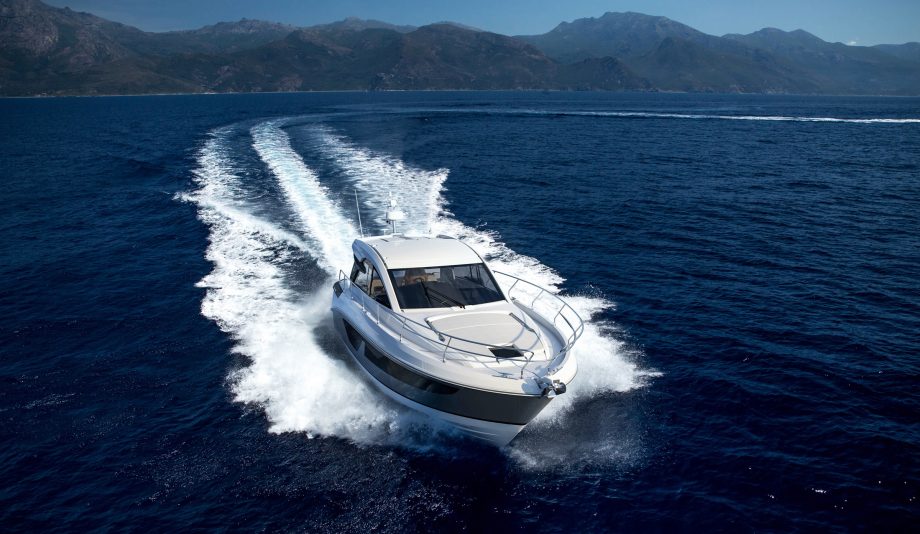 Beneteau’s handsome sportscruiser range has had a recent revamp and the new GT41 will make its UK debut at Southampton this year.

The Beneteau GT41 takes the GT40’s blueprint and includes enhancements here and there to improve life on board and keep the boat at the top of its game.

It’s a good looking thing, sporting a new hull window shape with a shark’s fin of GRP jutting into the glazing and a more sculptural look to the hardtop and aft flanks.

Read more about the Beneteau GT41

If any further evidence is required to prove that outboards are currently king then look no further than the Botnia Targa 27.2 GT.

Botnia’s range of hardened commuters have been powered by Volvo’s green monsters since the dawn of time but now even this great Finnish yard is praying at the alter of outboard propulsion.

Both engine options come from Mercury in twin 250hp or 300hp guise with a top speed of 45 knots for the latter making it the engine choice to go for if outright performance is your thing.

DeAntonio will exhibit two versions of the D28 at the 2021 Southampton Boat Show and, with a new UK distributor based in Poole, the arrival of these quirky outboard-powered Spanish cruisers on UK soil couldn’t be better timed.

Yes, you read that right, despite the closed transom and sun pad adorning the boats stern the DeAntonio D28 uses outboard propulsion with single 350hp/400hp or twin 200hp motors on the options list.

Some design trickery sees the engines mounted on the transom inside an engine box with a lid mounted on a gas ram to gain access to them.

Read more about the DeAntonio D28

The Fjord 41XL will make its UK debut at this year’s Southampton Boat Show, offering a great opportunity to get up close and personal with the brand that was building T-top sportscruisers long before the bandwagon was laden with competitor products.

The 41 is the first in a new line from Fjord which features a clean new look with a striking window line, redesigned hard top and a bewildering array of layout options for the main deck.

The most popular one is likely to be the version with a central sun pad and dinette flanked by wide passageways that lead past the central wetbar and helm station to more sunbathing space up at the bow.

Read more about the Fjord 41XL

The rich boat building lands of Suffolk aren’t quite as bustling as they used to be but Haines is going strong and will present an offshore version of its lovely 36 Sedan at the 2021 Southampton Boat Show.

There are few boats of this size that are quite so well suited for a couple to live onboard for long periods of time and that are built to such impressive standards.

This family-run yard doesn’t build in enormous numbers but its small team takes a huge amount of pride in their work and can accommodate fine levels of customisation for individual customers.

Read more about the Haines 36 Sedan

Cockwells plucked Hardy from the ashes last year and will have the first in a new generation of Hardys on display at the 2021 Southampton Boat Show.

The boat is a timeless well-proven model, around 30 of which have been built over the past 18 years, but Cockwells hasn’t hesitated in ringing the changes, the most interesting of which is the hybrid propulsion system.

The hybrid installation is based around a single 440hp Yanmar diesel engine, rather than the usual twin set-up, with a 20kW electric motor linked to a 22kW generator and a 48V 400AH lithium-ion battery bank providing an additional source of clean, quiet power for the single shaft and propeller.

Read more about the Hardy 42 Hybrid

Nord Star will have this model and the 31 at the 2021 Southampton Boat Show but this remodelled 28, which goes toe-to-toe with the Sargo 28 and Botnia Targa 27.2 (both also at the show) is a tidy package with some notable differences to its fellow Finns.

Though it falls short on sleeping space in comparison to the other two, the Nord Star 28+ has a proper little galley on the lower deck, complete with a sink, two-burner hob and fridge plus a decent run of countertop and good mix of storage.

This in turn leaves more space on the main deck where there are two supportive helm chairs and a U-shaped dinette aft, with a table that can be set at any position on a floor-to-ceiling pole.

Read more about the Nord Star 28+

Who says you need to go to the hassle of going to Cannes, Genoa or Monaco to see some big Italian exotica?

This year, the very boat you see in these pictures will be dominating the outer pontoon of Mayflower Park and, frankly, the Starship Enterprise itself would look less incongruous if it were perched in the same spot.

The Sanlorenzo SX88 was actually launched back in 2017 as the flagship of the range before the SSX112 arrived and stole that mantle, but the SX88’s rakish design still drops jaws wherever it goes. This particular Sanlorenzo SX88 will do so more than others, given that its home berth will be in the Solent (Lymington, to be precise).

Read more about the Sanlorenzo SX88

This model, which replaces the existing Sargo 28, completes the 28ft Finnish commuter boat trio that will all be on display at this year’s show.

The major news here is that the brand new hull is almost 1ft 5in (0.42m) longer than before and features a more rounded chine in an effort to make the ride softer and dryer.

This extra length translates into more space on board as well, where there is more deck storage, improved fuel capacity (500 litres compared to 375 litres), a bigger galley and a larger double bed in the forward cabin.

Read more about the Sargo 28 Explorer

The C330 was a triumph but Sealine isn’t resting on its laurels and has tweaked the original design to create the Sealine C335 for 2021.

For a boat a whisker over the 33ft the packing of the Sealine C335 is absolutely superb, especially on the main deck where twin sunroofs, a side door and bi-folding aft doors combine to create a brilliantly flexible single-level living area.

Not an inch of space has been wasted and with the aft canvases in place the cockpit can be still used as a living area even in inclement conditions.

Read more about the Sealine C335

Sunseeker has quite the line-up at the 2021 Southampton Boat Show, including the Predator 55 EVO, Manhattan 55 and Predator 74 XPS but we’re going to focus on the 65 Sport Yacht because it has one of the coolest upper helms we’ve ever seen.

Fitted with a pair of low-slung carbon fibre bucket seats, the steering wheel sprouts out towards the skipper on an extended column that lifts to an upright position so the IPS joystick can be used while standing for close quarters manoeuvring.

With the column lowered you recline in a go-kart like position, the steering wheel the centre of attention with the throttles mounted on the aircraft style module between the two helm seats.

The SR44 Blackhawk, a long awaited successor to the wonderful SR52 Blackbird that was launched a decade ago, made its global premiere at Cannes in 2019 but this is a rare opportunity to see Windy’s 50-knot weekender in the flesh on UK soil.

The truth is, this being a boat designed for soaking up indecent amounts of sunshine, there probably won’t be many that make their way to dear old Blighty so get down to the 2021 Southampton Boat Show and see it while you can.

Designed by Windy in conjunction with Dubois, Hans Jørgen Johnsen and Design Unlimited, the SR44 Blackhawk is available with Volvo Penta IPS pods, sterndrives and twin and triple outboards including Mercury’s new 600hp V12s for a top speed of 50 knots.

The show boat will be fitted with the largest pair of sterndrives with 440hp per side for a top speed of just over 40 knots. 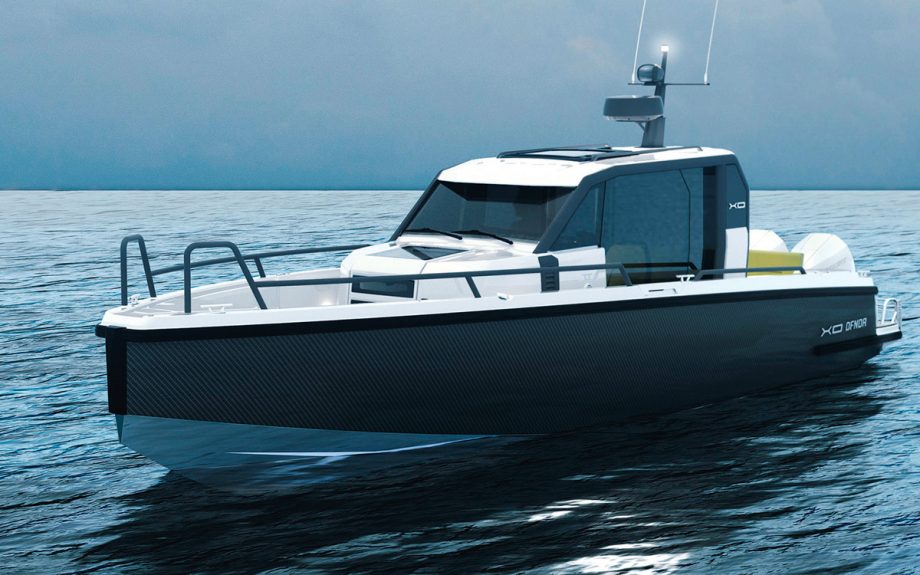 If you like your sportsboats with aluminium hulls and an added pinch of ruggedness then this all-new model from XO will be well worth a visit during the 2021 Southampton Boat Show.

The original DFNDR took an existing XO 240 hull, removed many of the creature comforts, replaced them with scaffolding and shock absorbing seats and touted itself as a bit of a rough tough 4×4 of the sea.

This new version, though, appears to have grown up somewhat and, in a crude but unavoidable comparison, has made the sort of transition that Land Rover recently performed with its own Defender.

Read more about the XO DFNDR 9

For families making their first foray into the world of motorboat ownership there won’t be many better turn-key packages at the show than the flagship of Finnish yard Yamarin’s range.

It’s on the pricey side for a sub-30ft sportsboat but this is a quality item, which comes as standard with some desirable kit, including twin 16in MFDs, teak decks, an electric sea toilet and a holding tank.

On top of this, the Premium version that will be displayed at the 2021 Southampton Boat Show has a convertible sun bed in the cockpit, trim tabs, a bow thruster and a fridge on deck.

Read more about the Yamarin 88DC